PayPal launched a new update to its Android application earlier this week, officially integrating the platform with Google’s mobile payment solution Android Pay. Following the update, PayPal users can add the service as a payment method for Android Pay; however, it’s important to note that users will only be able to pay using their PayPal balance in locations where Discover is accepted through Google’s mobile payment solution.

First and foremost, Android Pay users who may want to utilize their PayPal balance for mobile payments will be required to download the PayPal Android application on their smartphones. Then, the integration process is fairly straightforward and requires users to open the PayPal application, sign in with their accounts, head down to settings and then select Android Pay as a new gateway for PayPal transactions. Users will then be directed to a menu where they can attach their PayPal account to Android Pay and will receive further information in regards to how the service works. PayPal support doesn’t work without Discover because it relies on a PayPal Discover card acting as a medium between PayPal and Android Pay. Lastly, PayPal can automatically fill the user’s balance from their bank account or credit cards when making an Android Pay purchase that exceeds their funds, and users will be able to set a maximum “top up” amount before completing the process of adding Android Pay to PayPal.

The integration of PayPal into Android Pay was first announced in April and it is one of the many steps Google has been taking in order to expand its mobile payment solution and give users more flexibility when choosing their payment methods. In April still, Android Pay further expanded the list of supported banks in the United States, adding compatibility with cards issued by Barksdale Federal Credit Union, Florence Savings Bank, O Bee Credit Union, J.S.C. Federal Credit Union, and Security State Bank of Hibbing. The service also reached Belgium and Russia earlier this year and is expected to launch in other regions in the coming months. PayPal users can now follow the Google Play Store banner below and grab the latest PayPal version offering Android Pay integration. 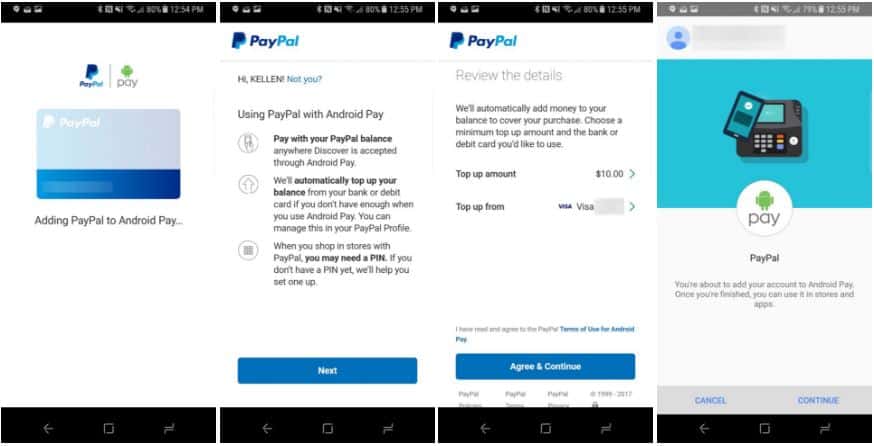