Following a number of rumors and leaks, the OnePlus 5 has just surfaced on AnTuTu. The company’s upcoming flagship is expected to land really soon, the company had already confirmed that it is coming this summer, and the OnePlus 3 was announced back in June last year, which means the OnePlus 5 will probably land next month. Having said that, the device will pack some really compelling specs, at least according to AnTuTu, read on.

The OnePlus A5000 (aka OnePlus 5) will sport a fullHD (1920 x 1080) display, if AnTuTu is to be believed. Many people are expecting the device to ship with a QHD (2560 x 1440) panel, but it seems like OnePlus yet again decided to go with a fullHD display. FullHD panels are, of course, cheaper than QHD ones, which will allow the company to keep the phone’s pricing affordable, and it’s also possible that the company thinks QHD displays are unnecessary on phones, who knows. In any case, the phone will pack in 6GB of RAM, says AnTuTu, and 64GB of internal storage will also be included here, though a 128GB storage variant will probably also be released. Qualcomm’s Snapdragon 835 64-bit octa-core SoC will fuel the OnePlus 5, along with the Adreno 540 GPU for graphics. AnTuTu also confirms that the device will sport a 16-megapixel front-facing camera, while a 16-megapixel snapper will be included on the back of the device as well. Now, the OnePlus 5 is expected to sport a dual camera setup on the back, and despite the fact AnTuTu is showing off only one camera shooter, it is possible that a second one will be included. In addition to all that, the source says that Android 7.1.1 Nougat will come pre-installed on the device, and on top of it, you’ll get OnePlus’ OxygenOS skin.

The latest OnePlus 5 render surfaced a couple of days ago, and suggested that the device will be made out of metal, and that it will, in fact, ship with a dual camera setup on the back. Now, the phone’s Sandstone case also leaked, and as part of that leak we got to see the device’s rear-facing cameras, and they’re offering a different design than the render we’ve mentioned at the beginning of this paragraph. All in all, the phone’s design is still a mystery, but we at least know what to expect in the spec department. 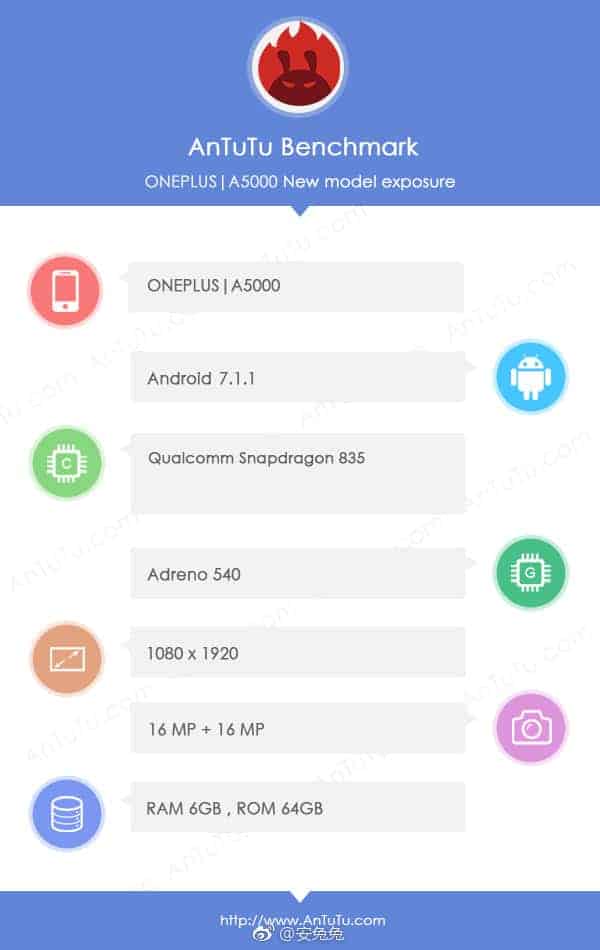