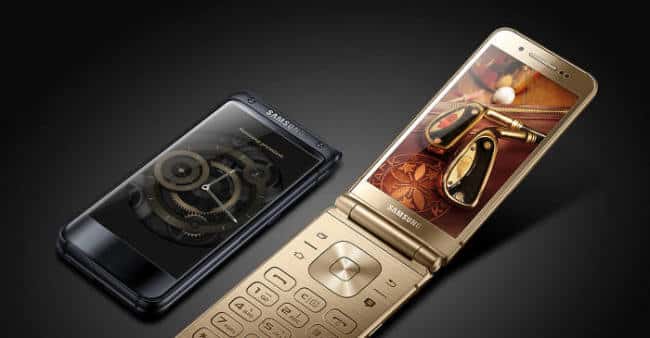 According to industry sources, Samsung is gearing up to release a new 'Folder' smartphone in South Korea, the Galaxy Folder 2. As many of you probably already know, the 'Galaxy Folder' line of smartphones refers to Samsung's flip phone smartphones, and according to sources, the all-new Galaxy Folder smartphone will come with a fingerprint scanner, wireless charging and Samsung Pay, which also means that it will offers NFC (Near Field Communications) functionality.

"I cannot confirm the launch date but the new phone will be launched soon in Korea," said an official of a local telecom carrier. This new smartphone will carry the SM-W2017 model name, and has been certified by the Wireless Power Consortium quite recently. Now, according to rumors, this new smartphone will sport a 4.2-inch dual OLED display screens, along with 64GB of internal storage. The device will be fueled by the Snapdragon 430 64-bit octa-core processor, and a 2,300mAh battery will also be a part of this package, and chances are it will not going to be removable. A 12-megapixel shooter will be placed on the back of this phone, and a 5-megapixel snapper will be located on the front side of the new Galaxy Folder smartphone. This smartphone will also be water and dust resistant, which probably means that it will ship with IP67 certification, at least based on Samsung's previous devices. "The new phone will be priced higher than any other folder phones here," added the aforementioned official, while he also said that there's a good chance Samsung will release a 'special edition' variant of this smartphone as well.

Now, the Samsung Galaxy Folder (2nd-gen) was announced back in July 2015, and its successor, the Galaxy Folder 2 is expected to land in the next month or two, though a specific date has not been confirmed just yet, as we've already mentioned. It is worth mentioning that this handset stopped by the FCC last month as well, and the device also leaked before, the leaked render is attached to this article as well. Now, chances are that this smartphone will not leave Korea in terms of availability, as flip phone smartphones are not exactly popular in that many markets, but they apparently are in Korea.

Advertisement
Advertisement
Trusted By Millions
Independent, Expert Android News You Can Trust, Since 2010
Publishing More Android Than Anyone Else
31
Today
63
This Week
171
This Month
4156
This Year
105633
All Time
Advertisement