An alleged listing of the upcoming Moto Z2 Play was spotted in the database of popular mobile benchmarking tool GFXBench earlier today, detailing a device powered by Qualcomm’s Snapdragon 626 system-on-chip (SoC) and 4GB of RAM. The new sighting of the handset mostly corroborates previously leaked specs of the Moto Z Play successor, indicating that the 64-bit piece of silicon that’s powering the device will feature eight cores clocked at 2.2GHz and the Adreno 506 graphics chip, in addition to running Android 7.1.1 Nougat. The operating system of the device is expected to be skinned in a light manner, though that has yet to be confirmed seeing how some previous reports indicated that Lenovo is looking to ship future Moto devices with ZUK’s ZUI mobile software suite after discontinuing its Chinese phone subsidiary.

The new GFXBench listing of what’s said to be the Moto Z2 Play suggests that the device will boast a 5.5-inch display panel with a resolution of 1920 by 1080 pixels, in addition to featuring 64GB of internal flash memory that will likely be expandable by up to 256GB via a microSD card slot. The screen of the device will likely be protected by 2.5D glass, with its top bezel housing a 5-megapixel sensor capable of recording Full HD video. The rear panel of the Moto Z2 Play will sport a single-lens 12-megapixel camera setup with support for 4K video and a conventional LED flash, the listing reveals. A representative of Lenovo recently confirmed that the upcoming smartphone will be powered by a 3,000mAh battery, presumably because the Chinese phone maker is looking to ship a device that’s significantly thinner than its predecessor. According to a TENAA-issued certificate, the upcoming handset will be only 6mm thick.

Industry insiders claim that the Moto Z2 Play will be announced on June 8, possibly alongside the Moto Z2 Force. The Lenovo-owned phone manufacturer is expected to release a wide variety of new handsets in the second half of the year in an effort to compete in as many price segments as possible. While it remains to be seen whether that strategy will pay off, an update on the matter should follow shortly. 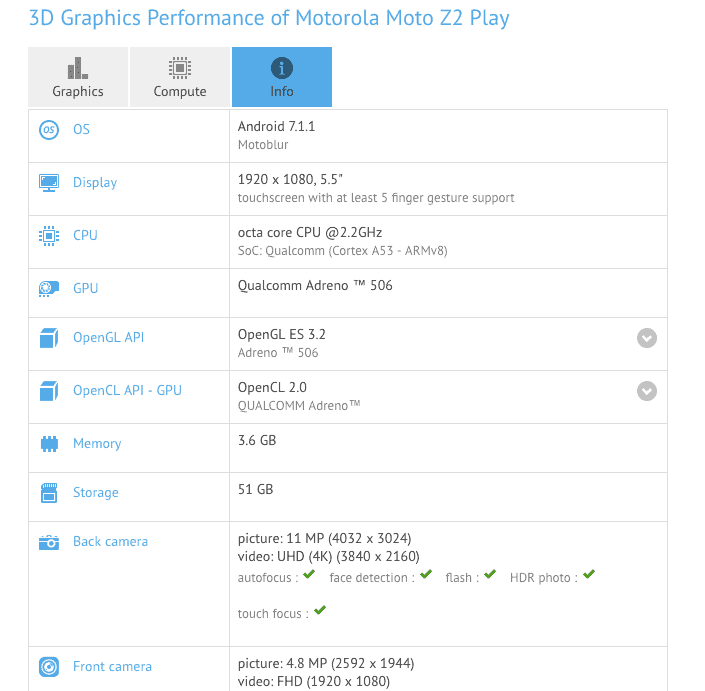