The much-awaited Android 7.0 Nougat update for the LG V10 has finally been released in South Korea. The incoming software comes with version number v30d, and brings LG’s all-new UX 5.0+ to the nearly two-year old device. The LG V10 originally launched with Android 5.1.1 Lollipop back in 2015, and received its Android 6.0 Marshmallow update last year. As for the latest update, it is currently available only for three carrier-locked versions of the phone – the LGF600S on SK Telecom, the LGF600L on LG U+ and the LGF600K on KTF. Users can install the latest software on their respective devices via LG Bridge, but the South Korean firm has also made available the stock KDZ firmware for the three devices on its website.

According to the official changelog released by LG, the latest update will bring a number of new features to the smartphone, including native multi-window support, a newly-designed notification shade and the ability to adjust the size of on-screen icons and objects. While only an incremental upgrade over Marshmallow for the most part, Android Nougat also brings some decent improvements over Android 6.0 in terms of battery optimization. While there’s no word on when the new software will be rolled out to users around the world, one would expect it to happen over the next few weeks, as long as no major bugs are reported. The company has also promised to roll out Android Nougat to its other premium device from 2015 – the LG G4 – so it will also be interesting to see when that will happen.

UX 5.0+, LG’s latest take on Android, was first seen on the LG V20 last year. It is pretty much identical to UX 5.0 for the most part, but for the fact that it comes with a few extra apps, like LG Health and Smart Doctor. While the former is evidently a health-oriented app that brings activity tracking features like the ability to count the number of jumps with a jump rope, the latter happens to be a phone manager app that helps manage the phone’s RAM usage, monitor the CPU usage, and free up any available system resources to make the device snappier. LG’s latest UX also comes with native blue-light-filter support, which is baked right into the OS. 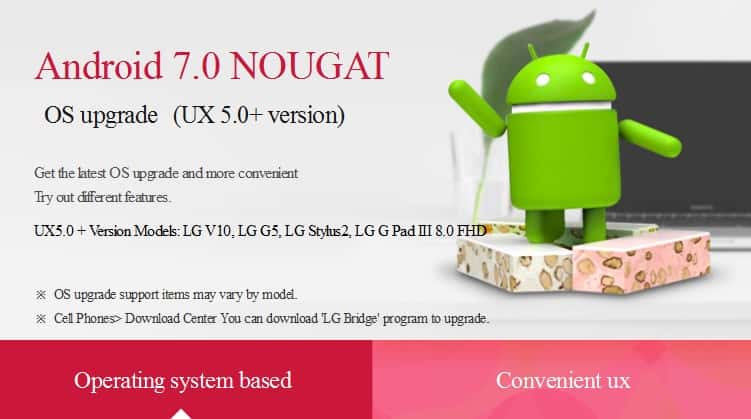