A Lenovo representative on Saturday surprisingly confirmed that the unannounced Moto Z2 Play will feature a 3,000mAh battery. The employee known only as "Auxen" took to Twitter to respond to one user who was telling Lenovo that if recent rumors about the Moto Z2 Play featuring a 3,000mAh battery were true, the company was making making a "big mistake." While not directly addressing the criticism, the employee using Lenovo's official Twitter account wrote that the Moto Z2 Play will indeed feature a 3,000mAh lithium-ion battery, adding that the unit won't be removable. It's unclear whether the source of the information was acting on their own or if the revelation was a conscious decision from Lenovo's marketing team, but regardless, an original equipment manufacturer (OEM) confirming rumors regarding specifications of an officially unannounced device is not a common occurrence.

In light of the fact that Lenovo's entire Moto handset lineup that the company is planning to release by the end of the year was recently leaked online, it's possible that the Chinese tech giant opted for a more unconventional approach to promoting its handsets and garnering some extra publicity. Even so, it's unclear why the phone maker would decide to start its wave of rumor confirmations by verifying a relatively negatively perceived aspect of the device – the fact that its battery was downgraded by 510mAh compared to last year's Moto Z Play. Seeing how the same employee later came back to the same tweet chain to post a link to a Lenovo Community thread on the advantages of non-removable batteries, the company may be trying to preemptively comment on the weaker points of its upcoming phone, though that doesn't make the latest turn of events any less unusual.

While the 2016 Moto Z Play also featured a non-removable battery, industry insiders are speculating that lowering its capacity will allow Lenovo to ship a significantly thinner phone while still not significantly sacrificing its battery life seeing how the upcoming device will be powered by the Qualcomm Snapdragon 626 that's more energy efficient than the Snapdragon 625 that was built into its predecessor. More details on the Moto Z2 Play will likely be available in the coming weeks. 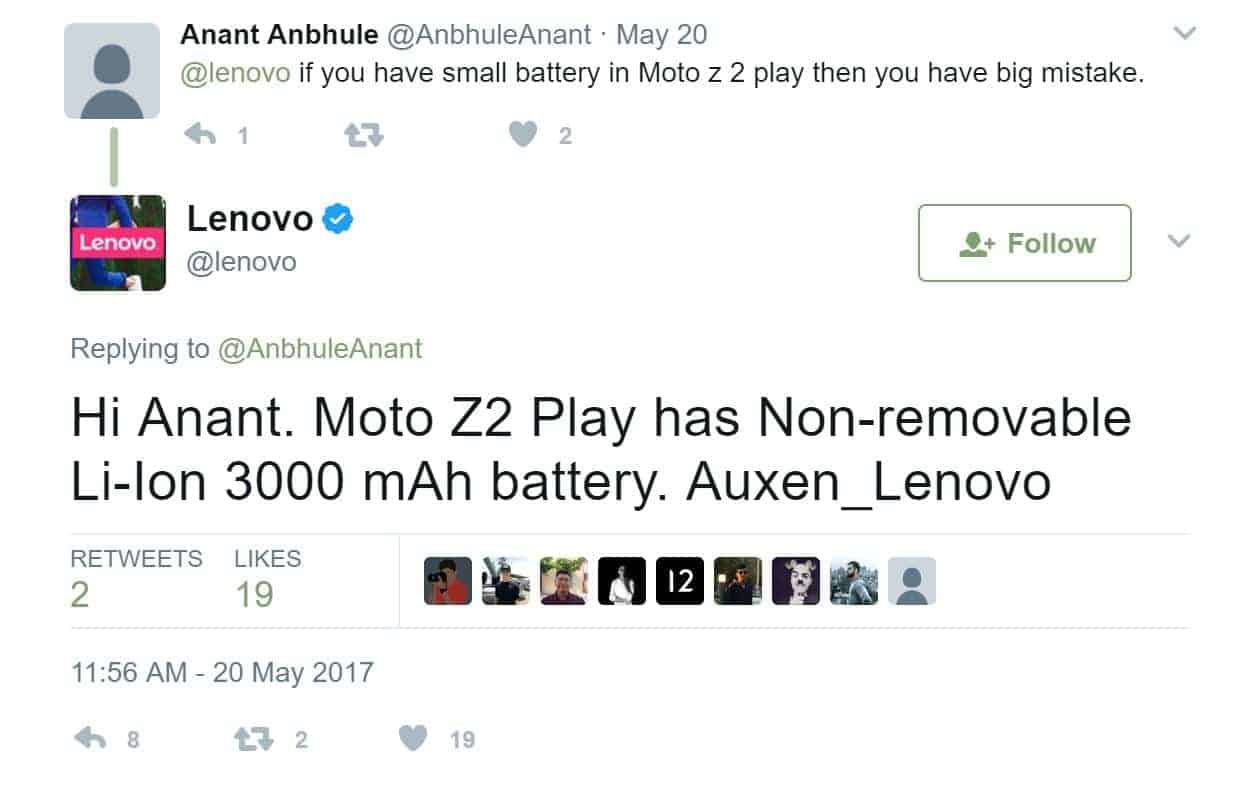