A couple of days ago, our source at LEAGOO shared a couple of the LEAGOO M5 Edge images, and now we can confirm its specifications, well, its partial specifications, and also the device’s price point, thanks to a Twitter post by LEAGOO’s Marketing Director (the post itself has been removed in the meantime). The LEAGOO M5 Edge is a rather interesting phone because of its display, it comes with a slightly curved display on the sides, and yet this is not a high-end smartphone, its specifications are actually considerably different than we initially thought, read on.

The LEAGOO M5 Edge will sport a 5-inch 720p (1280 x 720) display, along with 2GB of LPDDR3 RAM and 16GB of expandable internal storage (expandable up to 128GB via a microSD card). MediaTek’s MT6737 64-bit quad-core processor will fuel this smartphone, and a 13-megapixel snapper will be included on the back of the device. An 8-megapixel camera will be placed on the front side of the LEAGOO M5 Edge, and 4G LTE connectivity will also be a part of the package. Android will come pre-installed on the device, though we still don’t know what version exactly, and on top of Google’s OS, you’ll get LEAGOO’s Freeme OS 6.0. Now, the LEAGOO M5 Edge will cost $99.99 once it becomes available, and according to the provided info, the phone will go on sale next month, in June.

On top of all this, one additional image has been shared by the source, a render of the device, which you can check out in the gallery down below. Now, as you can see, all of the phone’s physical keys will be placed on the right, while its fingerprint scanner will be located on the back. The phone’s loudspeaker lies on the back as well, and right below it, you’ll notice the company’s branding. The device’s main camera protrudes on the back a bit, and below it, you’ll notice an LED flash. Antenna lines are present on the top and bottom of this phone, and the phone is made out of metal. A Type-C USB port will be placed on the bottom of this phone, in case you were wondering. That’s pretty much all the info that we have when it comes to the LEAGOO M5 Edge, the device will launch soon, so stay tuned. 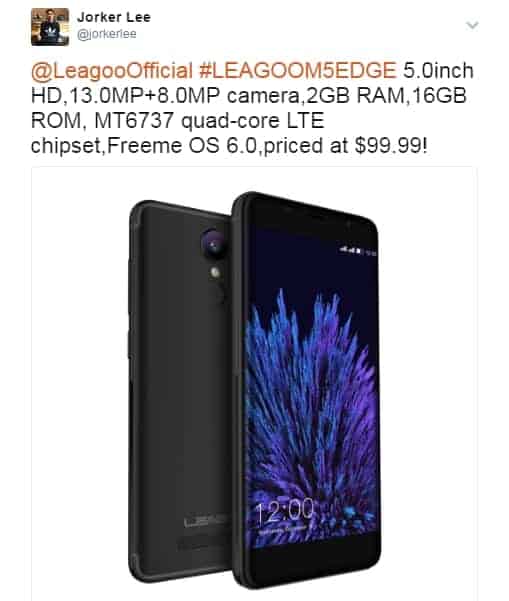