Embedded SIMs (eSIMs) are not expected to start appearing in smartphones from tier 1 manufacturers until 2019. This is based upon recent research results from IHS Markit. As a direct result of the suggested 2019 mainstream smartphone expansion, IHS also predicts that the number of devices shipping with an eSIM by 2021 could reach a total of 986 million. This would be up from the 108.9 million devices noted for 2016.

While there are some devices that do already come equipped with an eSIM (like Samsung’s Gear S2 Classic) IHS sees this initial market still largely being occupied by Machine-to-Machine (M2M) and tablets in the near term. IHS actually expects some smartphones to start coming equipped with the technology as early as next year (2018), although these smartphone options will likely come from less prominent manufacturers as a means to offer something new, as well as acting as the test bed for the commercial smartphone market. With the expectation that tier 1 manufacturers will likely hold off a little longer and start to include the technology on their devices at some point in 2019. With IHS further pointing out that once one of the “top three” (Samsung, Apple, and Huawei) introduce the technology, the others will likely follow very quickly, as will the market in general – resulting in an overall shift away from removable SIMs. 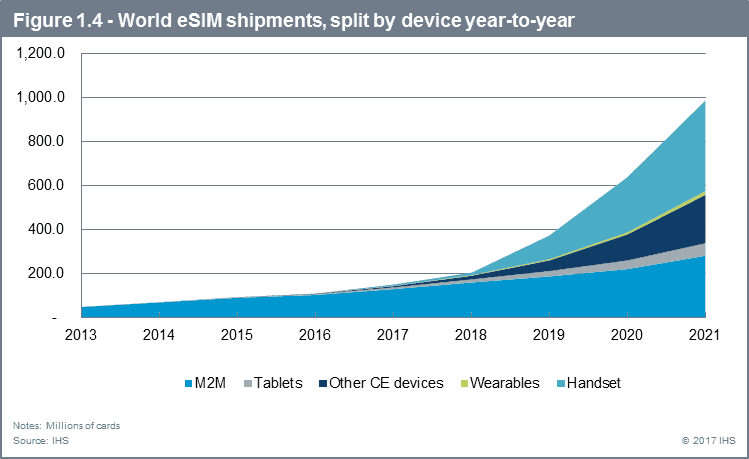