The Huawei MediaPad T3 Lite 10 tablet has been listed on popular benchmarking site GFXBench, revealing quite a bit of its hardware specs. The device is yet to be announced officially by the Chinese multinational company but has already been certified by the FCC. Meanwhile, the spec sheet revealed by GFXBench seems to suggest that it will be a mid-range device, much like the two other MediaPad T3 devices announced last month. However, there will be a few differences between the three models. Firstly, the MediaPad T3 Lite 10 will have a larger display than either of the two devices announced earlier. While the two previously announced MediaPad T3 tablets feature 7-inch and 8-inch screens, respectively, the upcoming device will ship with a 10.1-inch display with a resolution of 1920 by 1200 pixels.

There will also be a few subtle differences in the hardware department, which will likely make this device a more powerful performer than its siblings. While the exact SoC powering the MediaPad T3 Lite 10 isn’t revealed directly by GFXBench, the listing does suggest that it will be powered by a Cortex-A53 octa-core CPU clocked at 1.4GHz. Coupled with the fact that the GPU inside the tablet will be the Adreno 505, it is fairly evident that its SoC will either be the Snapdragon 430 or the Snapdragon 435; the only two Qualcomm SoCs that are equipped with that particular graphics chip. The listing also suggests that the device will ship with 3GB of RAM and 32GB of internal storage.

Imaging options on the upcoming Huawei tablet will include 8-megapixel cameras on both the front and the back of the device. While both cameras will be able to record 1080p videos, the rear-facing primary sensor will also have autofocus support and be equipped with an LED flash. Sensors will include an accelerometer, gyroscope, magnetometer (e-compass), pedometer, and an ambient light sensor. Unsurprisingly, the device will also have GPS, Bluetooth, and Wi-Fi adapters, according to the listing. The tablet has just been listed on the benchmarking site, and while that does provide an idea of what to expect from it, the information is far from complete. There’s still no word on when the Huawei MediaPad T3 Lite 10 will be launched or at what price, though more details about the tablet should be available in the coming months. 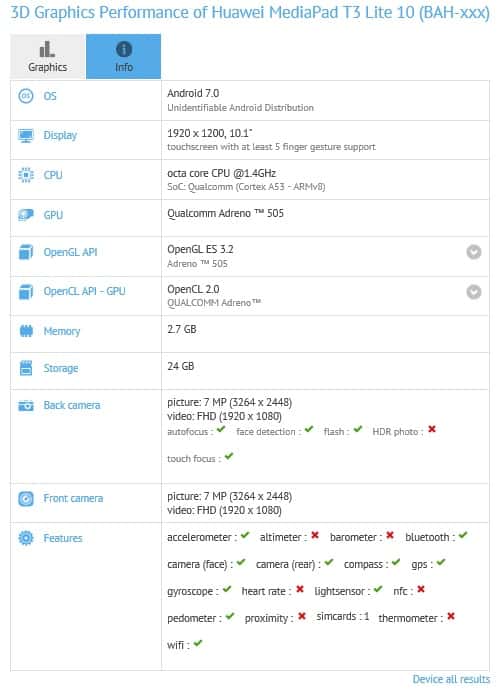