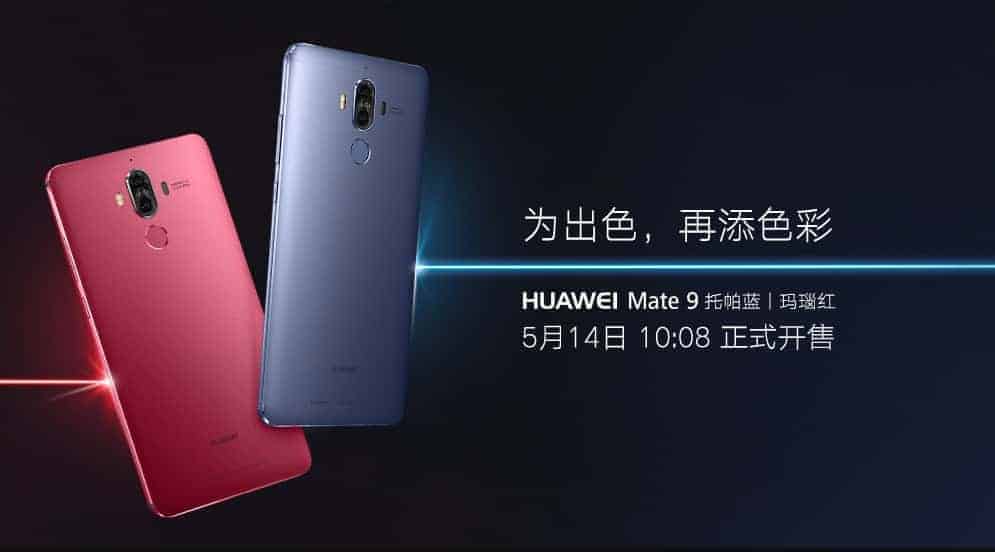 Two new Huawei Mate 9 color variants surfaced yesterday, red and blue, and the two color options have just been made official by the company. Huawei has officially announced the Agate Red and Topaz Blue color options of the Huawei Mate 9 in China, even though the two color options are still not available for purchase. Huawei said that consumers in China will be able to get their hands on these new options starting on May 14, just in case you live in China or are in a position to get one of these two smartphones some other way.

Now, everything other than the paint job on the Huawei Mate 9 remains unchanged, the phone’s specs are still intact, and so is its price point (3,899 Yuan / $564). Having said that, the Huawei Mate 9 is currently available in Space Gray, Moonlight Silver, Champagne Gold, Mocha Brown, Ceramic Black, Black and Obsidian Black color variants. As you can see, consumers really have a lot of options when it comes to the Huawei Mate 9, and the company just added two more options on top of all those color variants that are already available in hopes that they’ll be able to sell some additional Mate 9 units before its successor arrives. Speaking of which, the Huawei Mate 10 is expected to land at the end of this year, though it is also possible that Huawei might announce it during this year’s IFA in Berlin, in September. The Huawei Mate 9 was launched back in November last year, but some previous ‘Mate’ flagship phablets landed during iFA, so, who knows, we’ll just have to wait and see what happens.

The Huawei Mate 9 sports a 5.9-inch fullHD (1920 x 1080) IPS LCD display, 4GB of RAM and 64GB of expandable internal storage. The device is fueled by the Kirin 960 64-bit octa-core SoC, and a 4,000mAh non-removable battery is also a part of this package. There are two camera snappers on the back of the Huawei Mate 9 (20-megapixel and 12-megapixel units), while the fingerprint scanner is located below them. An 8-megapixel camera shooter can be found on the front side of the Huawei Mate 9, and Android 7.0 Nougat comes pre-installed on this flagship phablet, along with Huawei’s Emotion UI (EMUI) 5.0 skin. If you’d like to know more, check out our full review.