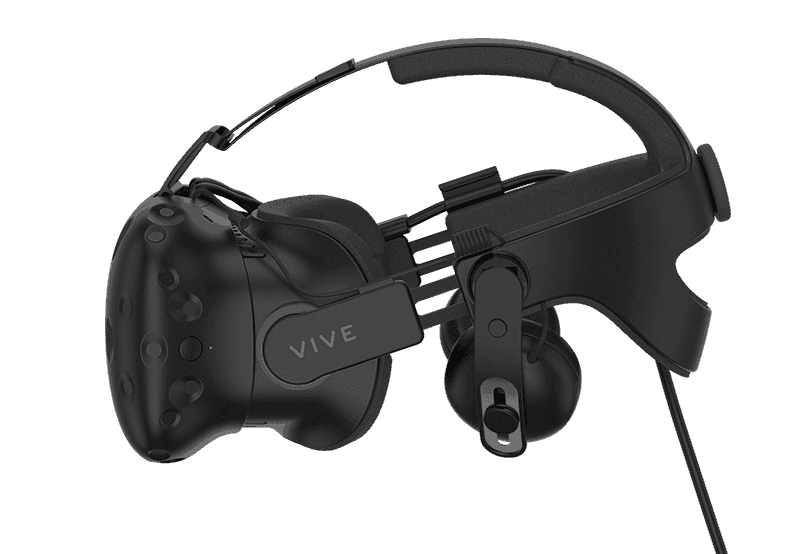 HTC's Vive Deluxe Audio Strap can be yours June 6th for $99 as the company announced today on the official Vive blog, confirming a cost and availability on the upcoming accessory for their popular virtual reality headset. The new Vive strap will be available from Vive retailers as well as on Vive's official website, and it will be launching in the UK as well as  in Europe and Japan at prices of £99, €119, and ¥799.00 respectively.

While the HTC Vive already comes with a headstrap to keep the headset secure during use, the deluxe audio strap comes with integrated audio through on-ear headphones and it has a nifty dial at the back to loosen or tighten the grip of the strap, making it extremely simple to get just the right fit during wear. Since the headphones come integrated with the strap you don't have to use an external pair or play without headphones, and this makes it a great option for any Vive owners who may have to play where other users are present so other users don't have to hear the content audio, and for those who would prefer a simpler option as an extra pair of headphones means more wires or cords, where the Deluxe Audio Strap has everything built right into one single unit to keep things more organized and seamless.

HTC originally announced the Vive Deluxe Audio Strap back during CES in the beginning of this year but during it's unveiling they kept quiet on the availability and pricing information, noting only that the details surrounding that information would be made public later on in the year. Perhaps now that it's May and the launch happens within the first week of next month, HTC felt it was time to let potential customers know that the chance to buy it would be just around the corner. If you'e on the fence about picking up a pair, you'd be doing yourself a favor to weigh out the options in regards to the quality of the audio and cost of the strap compared to a traditional pair of gaming headphones, if you don't already own a pair. While $99 is a pretty competitive price for a set of headphones that essentially comes with the strap for the headset as an all-in-one, a good pair of gaming headphones is likely to sound better, though you'll almost certainly pay more for those. What it might come down to is whether or not you see the value in paying more for a good headset that's separate, and if you're ok with the additional cord coming from the headphones since they're not integrated with the strap.