HTC is set to reveal its latest flagship – codenamed “Ocean” and tentatively referred to as the HTC U11 – tomorrow but the latest leak may mean that there’s nothing left to reveal. While previous leaks have shown at least some of these specifications and even some images, this new leak reportedly includes all specifications. In fact, there have been so many leaks pertaining to HTC’s up-and-coming flagship that all the company has left to do now is either confirm or rebut them.

To begin with, the leak adds confirmation to earlier reports that the device would feature 4GB of RAM and 64GB of storage. Earlier rumors also speculated that a version would release with 6GB and 128GB of RAM and storage, respectively. The new spec sheet seems to confirm this for at least the Chinese market. Both versions will support up to a 2TB micro-SD card. The leak also confirms prior reports pertaining to the HTC U11’s processing unit and it is listed as having the same Snapdragon 835 chipset as Samsung’s recently released Galaxy S8. On the user side of things, the HTC U11 will be running Android 7.1 (Nougat) overlayed by HTC’s popular Sense UI. That’s all backed by a 3,000mAh battery featuring quick charging 3.0 and charged via USB-C cable. That hardware is packed behind a 5.5-inch Gorilla Glass 5 display with a resolution at 1440p and 534 pixels per inch. On the front, the device will feature a 16-megapixel shooter, while the main camera is reported to shoot at 12-megapixels and features Sony’s IMX362 sensor. The HTC U11 will be available in a total of five colors – including Black, Blue, Red, White, and Silver – according to the leak. All of the sensors to be expected from a flagship handset are intact and the spec sheet also lists HTC’s  squeezable Edge Sense technology. As to the on-device microphones, the HTC U11 is listed as featuring full 360-degree audio recording.

The wait to see whether or not any of this really rings true will be over soon enough on May 16 – at 2 am Eastern Time. Meanwhile, the content of rumors surrounding the device have become pretty consistent and everybody will just have to tune in to see if there are any surprises left. 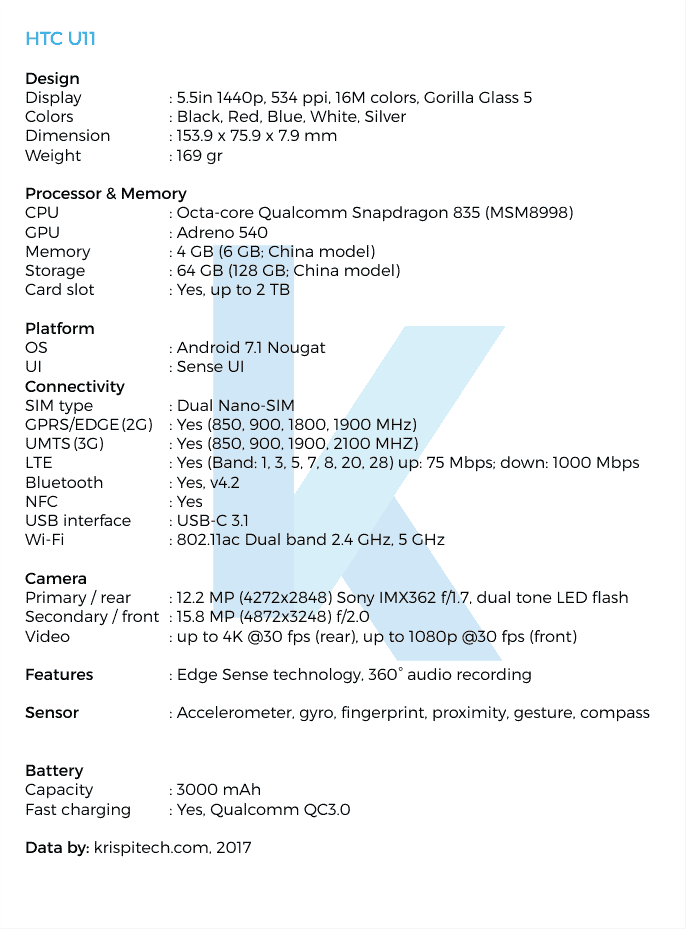