Google’s Jamboard is now available, as of today, in the US for G Suite customers. It’ll cost $4,999 for a 4K digital whiteboard that works great in both offices as well as classrooms. Google actually first announced the Jamboard back in October of last year, and it was then pitched as a cloud-based collaborative whiteboard that was about 55-inches, diagonally. It had Google Docs-style collaboration and there were also Android and iOS apps that allowed users to join in on the “jam”. Google later announced that it would be available in May, and here it is.

The Jamboard will cost you $4,999 and will also come with a $600 annual support fee. However, Google is offering $300 off of that annual support fee for those that order the Jamboard before the end of September. Included with Jamboard are two stylus’, an eraser as well as a wall mount. There is a rolling stand available, but that will cost you around $1,199 extra. The steep price for the stand is likely because it needs to have some sort of power inside to keep the Jamboard running when it’s not near an outlet. Currently, Jamboard is only available in the US, however Google does note that it’ll be available in the UK and Canada “this summer”, but no concrete date has been mentioned just yet. Google has teamed up with BenQ, who’s pretty well-known for computer monitors, for delivery and support on the Jamboard.

Google has a pretty interesting product here in the Jamboard, and it’s something that will likely be a niche product. While there are plenty of businesses using Google’s products for their businesses, there may not be too many that are willing to spend this type of money on a whiteboard. However, it could be very useful and beneficial for education customers. Google is offering up the Jamboard in cobalt blue, carmine red and graphite gray. This was something that early adopters told Google they needed to add to Jamboard, to really make it appeal to more users. Additionally, they wanted more secure Wi-Fi configurations, which is something else Google added with Jamboard. 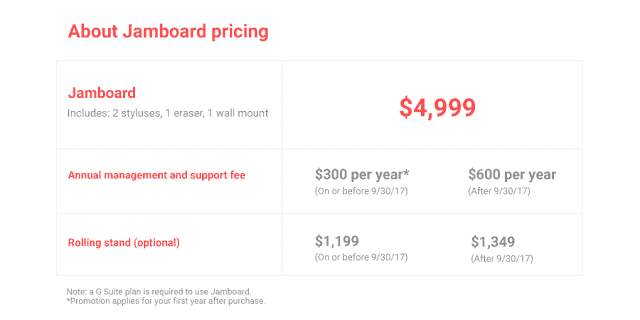