A device labelled as “Google Taimen” has now shown up being benchmarked on Geekbench. The benchmark listing is dated May 11 and is a little light on details. However, there are some noteworthy points listed. First off, the device benchmarked was noted running on Android O – the version of Android currently only available as part of a developer preview. Likewise, the device was shown containing 4GB RAM and powered by a Qualcomm Snapdragon octa-core processor (clocking at 1.90 GHz) – most likely the Snapdragon 835. The only other notable aspects gleaned from the listing is that the single-core score came in at 1804, while the multi-core score came in at 6248. Which are both fairly high scores in the world of Geekbench.

Generally speaking, that is all the firm details that are on offer with this benchmark. However, its mere existence is noteworthy enough. As while all rumored devices are basically rumored, Taimen in particular, has remained a rather unknown device. The common understanding here is that Taimen is going to be a device released by Google, along with the 2017 Pixel range. However the jury is still out on whether it will actually be branded as Pixel or not.

Overall, speculation now points to three Google devices being released this year. These are currently understood to be the one shown here, Taimen, along with Walleye and Muskie. The latter two being what many assume to be the next-generation Pixel smartphones, à la Google Pixel 2. With Muskie expected to be the smaller of the two devices and a direct follow up to the standard Google Pixel, and Walleye a direct follow up to the Pixel XL. Which is where the confusion around Taimen seems to stem from, as it remains unclear what sort of device this will be. For instance, it has been suggested that it might come in the form of a Pixel XXL – which presumably means a larger screen. Which in itself, has also fueled speculation that Taimen could even be a tablet. In either case, the listing on Geekbench today, if nothing else, adds to the growing literature that there will actually be three devices incoming from Google’s hardware division this year. 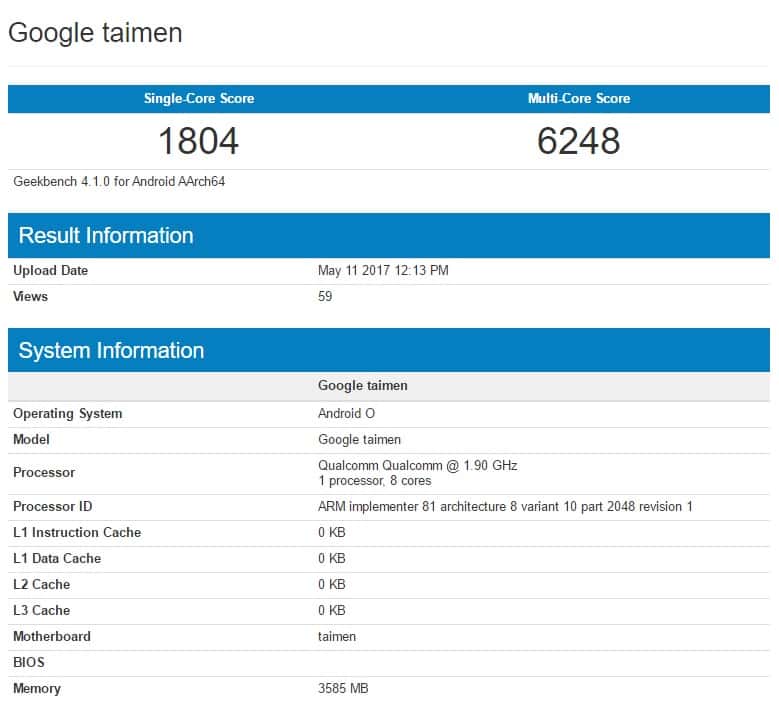