Google removed the ability to send Google Play Store “Digital Gifts” to other users via email, a customer support representative of the Mountain View-based tech giant confirmed in a recent exchange with one user. The feature was removed with a recent update to the service due to “security reason,” the rep revealed, without clarifying on the matter. The Google Help Play pages describing the feature aren’t reflecting the change as of this writing as they’re still detailing the process of purchasing and sending what’s essentially Google Play Store credit, digital books, and Google Play Music subscriptions. According to the same source, the Google Play Store still supports Digital Gifts that were purchased from third-party retailers, though it’s currently unclear whether the company is also planning on discontinuing that feature at some point in the future.

Digital Gifts that Google Play Store users were able to send to other people via email were originally introduced in November 2015 and the functionality hasn’t changed during its relatively short lifespan. While the feature was available, users could have paid for Google Play Store gift cards valued at $10, $15, $20, $25, $50, or $100 and send them to other users via Gmail, essentially loading the predetermined amounts of real currency to Google Accounts of their recipients. Credit gifts were only available in the United States and while some consumers were expecting that the Alphabet-owned company will expand their availability in the future, the Internet giant apparently had different plans. It’s currently unclear whether Google Play Music subscriptions and Google Play Books that users in select territories were also able to send are still supported by the service.

It remains to be seen whether Google eventually launches an alternative to Digital Gifts or discloses whether its discontinuation of the feature was prompted by a particular security concern. Being one of the company’s flagship products, the Google Play Store is often undergoing changes and improvements and will likely continue doing so in the future, though feature removals still aren’t an everyday occurrence. The tech firm might reveal more details about its plans for the Google Play Store at Google I/O 2017 that’s scheduled to start tomorrow. 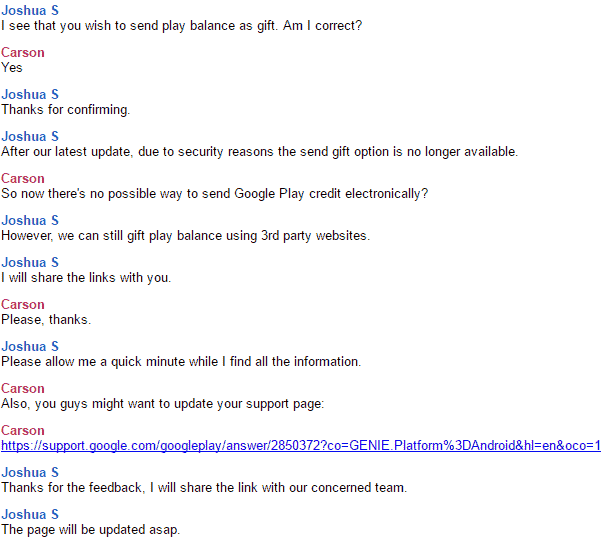