A private internal email from Google, sent by the leader of a team charged with investigating leaks, has made its way into the public eye as evidence in a lawsuit against Google from a former employee. The email makes three things very clear; Googlers will face job loss if they’re found to be leaking, there is a team dedicated to investigating any internal information that reaches the public, and discussions within the company are getting heated. The leak investigation lead, Brian Katz, goes over Google’s stance on leaks in the email, lays out plainly that employees who leak are dealing a blow to the company and will be let go, and asks for discussions that have taken on a “less than civil” tone to be more “respectful”. The email had been mentioned and brought to attention before, but this is the first time its full text has been available to the public.

Katz starts out the email by introducing himself, which could mean that the team he’s leading is fairly new, he’s fairly new to it, or it’s been working largely in the background up until now. From there, he goes over some changes to Google’s internal TGIF talks meant to prevent leaks. Rather than a text transcript, Google will provide live streams and videos. The next order of business is to go over the value of openness in the company, and how that ties into the damage that leaking could do, and the consequences for being a leaker. Katz rounds out the message by calling for colleagues to be more respectful of one another on internal communication platforms like Memegen and Google+.

Google has been subject to numerous leaks in the past, and a good chunk of their highly secretive company culture has been exposed piece by piece over the years because of it. The aforementioned Memegen internal meme generator tool, for example, ended up seeing some of the content that Googlers had made with it leaked out at one point. In the face of multiple security threats and prevalent leaks all over the tech world, seeing a company like Google openly cracking down is par for the course. 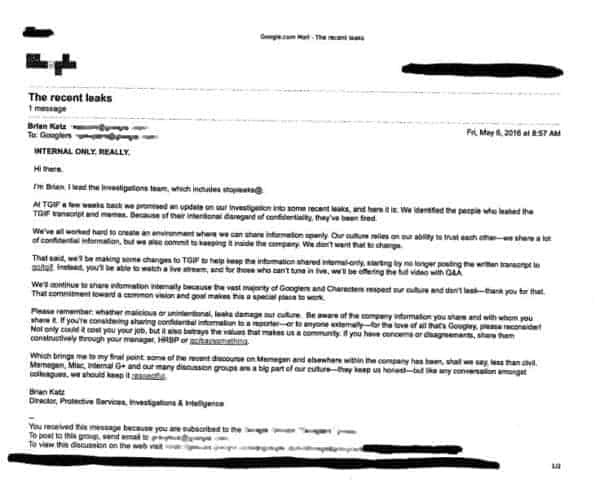