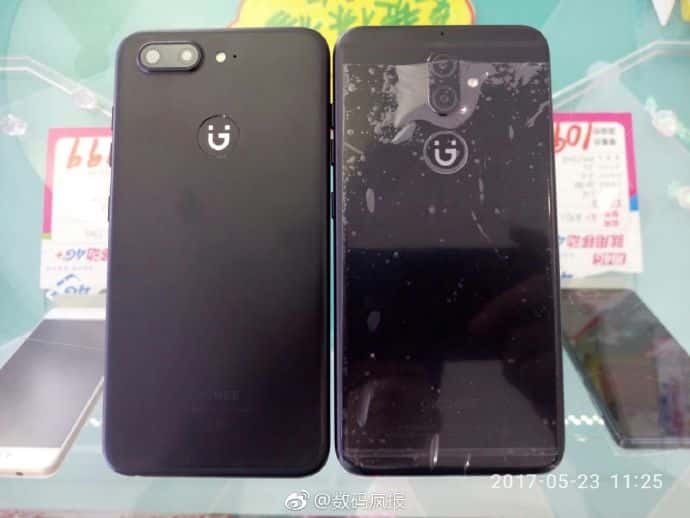 Seven new real-life photos of a device that's said to be the upcoming Gionee S10 have leaked online on Tuesday, appearing on Chinese social media website Weibo. The handset shown in the newly uncovered images is seemingly identical to a number of other models that were leaked in recent weeks, boasting a horizontal dual camera setup with a standard LED flash in the top-left corner of its rear panel. The smartphone sports a black matte finish, which is the second color variant after the glossy gold one that was leaked online. Just like previous reports suggested, it seems that the Gionee S10 will ship with a physical Home button on its bottom bezel that will presumably house an integrated fingerprint sensor. One of the images seen below depicts the Gionee S10 next to the Gionee S9, indicating that the handset won't be larger than its 2016 predecessor.

Industry insiders previously claimed that the Gionee S10 will boast a metal body and a 5.5-inch display panel with a resolution of 1920 by 1080 pixels protected by 2.5D glass. The device is expected to be powered by a 64-bit system-on-chip boasting eight cores clocked at a maximum frequency of 2.0GHz and while no firm details regarding the chipset's manufacturer have yet been revealed, the Chinese phone maker will likely opt for a MediaTek-made piece of silicon, just like it did with the Gionee S9. The upcoming handset is also said to sport 4GB of RAM and 64GB of internal flash memory that should be expandable by up to 256GB via a microSD card slot. All of the aforementioned hardware is thought to be powered by a 3,700mAh battery that won't be removable, previous reports have indicated.

The dual camera setup seen in the newly uncovered images allegedly consists of two 13-megapixel sensors, while the front side of the device features a 16-megapixel shooter. The Gionee S10 will run Android 7.0 Nougat out of the box, enhanced with the company's proprietary mobile user interface. As the smartphone is widely expected to be unveiled on Friday, May 26, more details on Gionee's latest mid-range handset and its availability will likely follow shortly.