The Samsung Galaxy Note 5 is beginning to get its update to Android 7.0 Nougat. This is not the very latest version of Android, but it is pretty close – and much closer than Android 6.0 Marshmallow. The update apparently is rolling out in Europe right now, which means other countries and the US carrier variants shouldn’t be too far behind. The update, as expected, is pretty large. It weighs in at around 1298MB, so it should go without saying, but you should make sure you are on WiFi before attempting to download the update for your device.

The update to Android 7.0 Nougat brings in quite a few features for the Galaxy Note 5, although a lot of the changes are indeed under-the-hood. Since the Galaxy Note 5 does have Samsung’s own skin on top, it doesn’t actually have many user-facing features. But one of the more important features that comes in Nougat is an enhanced version of Doze. This was announced with Marshmallow in 2015, but with Nougat Google made it even better. It now engages sooner, to help extend your standby battery life, it also puts the phone into even deeper sleep, which means it’ll use even less power when the phone is not in use. This helps to extend the battery life as a whole, which is important on an older smartphone like the Galaxy Note 5. Nougat also brings multi-window, but that’s a feature that Samsung has had for a few years already, and Samsung is actually keeping their multi-window over Google’s, in Nougat and beyond.

Those of you in Europe with the Galaxy Note 5, you should be able to download the update now. Simply head to settings, then tap on About Phone, and Check for Updates. You should see the update begin to download. Now since it is a fairly large update, it may take a bit to download. It’ll also take a bit to install, so you’ll want to make sure your battery is around 50% or more, before starting the installation. Since you are updating to a new version of Android, the reboot after the update, is going to be a bit longer than usual. So don’t freak out if it takes longer. 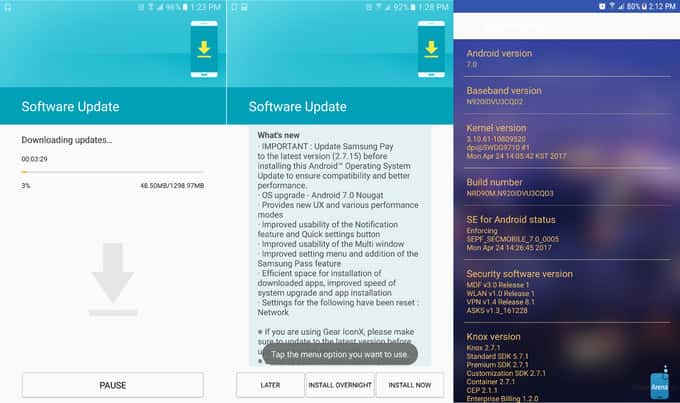