Google’s upcoming version of Android OS will improve boot times and application performance considerably, but that is not all it has in store for the user base. As expected from a new OS version, Android O will introduce a handful of brand new features to the mobile platform, including a new method of selecting on-screen text based on Google’ machine learning algorithms.

Making text selections on an Android smartphone using touch input isn’t necessarily a pleasant experience, and it can vary from one user to the next depending on a variety of factors, including the size of the device and the user’s fingertips. Needless to say, text selection on touchscreen devices requires a certain degree of fine-tuning, which can become frustrating given the fact that the process usually leads to the user’s fingertip covering the text in need of a highlight. Google intends to fix these inherent issues with text selections in Android OS by implementing machine learning within the text selection process. In practice, the new method will allow users to highlight only part of a word or sentence, and Android O will attempt to recognize the user’s intentions and bring up context menus. For example, if a user selects part of a street address, the system will ideally recognize and highlight the entire address for the user. Additionally, the new text selection tool will not only include cut/copy/paste tools but will also provide contextual information such as a Maps button linked to the address. Another example of how the system works is for the user to highlight part of a phone number while the smart selection tool highlights the rest and offers the option to call that specific phone number.

Google hasn’t revealed much about how the smart selection tool in Android O will be distributed, and whether or not it will be released in the form of a software update to Google’s Gboard application. For now, it seems to be part of the Android O development process, and the aforementioned version of Android is expected to debut later this year. Until then, Android enthusiasts and developers can get a taste of Android O and some of the new features through the Developer Preview 2 launched yesterday at Google I/O. 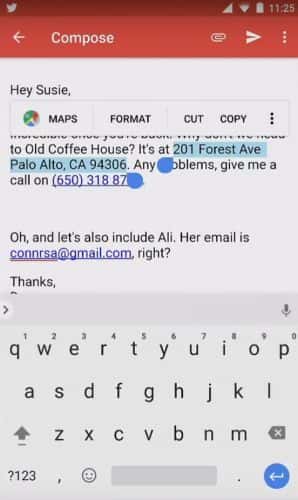