Yesterday Google launched the second preview for its upcoming mobile OS version Android O, and during the first day of Google I/O the company discussed some of the new additions to the operating system and how it will change the user experience. Two of the topics touched upon by the search engine giant were reboot times as well as application performance. According to Google, Android O will not only cut reboot times by around 50 percent but will also allow applications to perform twice as fast compared to the previous version of Android OS.

The amount of time it takes for a smartphone to reboot might not interest most users, however considering Google’s more recent method of launching regular security updates for the Android platform, there are some benefits to this notion. Furthermore, there is a rule of thumb that smartphones – and nearly every computing device for that matter – should be rebooted on a regular basis in order to maintain performance and avoid unwanted behavior, and some manufacturers including Samsung even went one step ahead by adding an auto reboot option to their smartphones running Android 5.0 Lollipop or higher. Having said that, Android O’s capabilities to reboot a smartphone twice as fast compared to devices running Android Nougat will not be unnoticed by heavier users and developers.

In addition to faster reboot times, Google also revealed that Android O will boost application performance considerably. The company gave an example of a standard workflow benchmark in Google Sheets (image above) revealing that the process is more than twice as fast on Android O compared to Android Nougat. However, whether or not these impressive bumps in performance will apply across the board to all applications or only if certain conditions are met remains to be seen. Google didn’t go into technical details as to how Android O achieves these faster reboot times and higher application performance, but hopefully, the company will shed more light on the matter before Google I/O 2017 comes to an end. In any case, it’s worth reminding that Android O Developer Preview 2 is now available on devices including the Google Pixel lineup, as well as the Nexus 5X, Nexus 6P, and Nexus Play. Furthermore, Google is launching its latest set of developer tools for Android O, including system images and emulators, an SDK (software development kit) and the latest Android Studio Canary build. 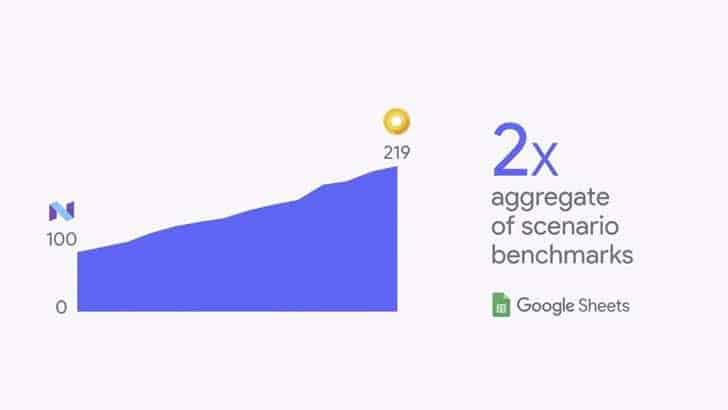