Google has now made available the latest Android distribution numbers and it seems Android 7.0 (Nougat) has now increased its distribution share, with the latest Android version now occupying 7.1-percent. Further broken down as 6.6-percent for Android 7.0 and 0.5-percent for Android 7.1. Overall, this equates to a 2.2-percent increase compared to last month when Android Nougat was noted at 4.9-percent. Which itself, was a 2.1-percent increase compared to the month before, when Nougat was only at 2.8-percent. So over the last two months, Nougat has grown in share by 4.3-percent overall, almost tripling its level of distribution. While on the face of things that sounds like a pretty good increase for the latest version of Android, it is worth taking a look at last year for a comparison. One year ago exactly (May 2016), Android 6.0 (Marshmallow) – the then newest Android version on the scene – was occupying 7.5-percent in terms of distribution. So while it is a decent rise for Nougat, it is no different (if anything, it is less) than what was noted for Marshmallow at the same time last year.

Speaking of which, Marshmallow, seems to be seeing little change of late. In March Marshmallow stood at 31.3-percent, while in April it actually decreased down to 31.2-percent. Now in May, it is once again listed at the 31.2-percent level – so no change. Which seems to be an almost identical situation that Android 5.0 (Lollipop) finds itself in. Back in March of 2017, Lollipop stood at 32.5-percent, and by April it had dropped down to 32-percent. Now in May, Lollipop stands at 32-percent – again no change.

Moving further back in version number, Android KitKat is now listed with an 18.8-percent distribution. Which is down from April’s listed 20-percent, which in turn was down from March’s 20.8-percent. Android Jelly Bean is also on the downward slide, now residing at the 9.1-percent level, down from April’s 10.1-percent and March’s 10.6-percent. As is Ice Cream Sandwich, which is now at the 0.8-percent level, compared to 0.9-percent in April and 1-percent in March. Although, Android Gingerbread is on the bounce it would seem. In March, Gingerbread was listed at 1-percent, and in April that figure dropped down to 0.9-percent. Now in May 2017, Gingerbread is back at the 1-percent level again. 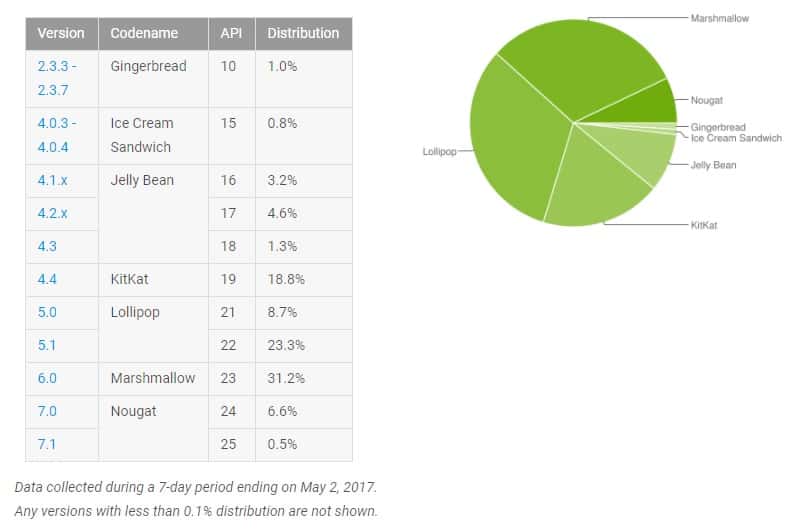