The Xiaomi Mi 360° Panoramic comes in a square-shaped body and features 24-megapixel sensors on the front and back. The two sensors work together to provide a 360-degree view but apparently, the unit also features a total of four shooting modes, allowing it to act as a more conventional camera if necessary. The device also supports 6-axis Electronic Image Stabilization (EIS) and the entire package is IP67 certified. The Xiaomi Mi 360° Panoramic camera will be accompanied by an application designed for photo editing, meaning that, in theory, users could capture moments, edit their files, and make room for new content on the go. Reportedly, the unit will draw energy from an integrated 1,600mAh battery and offers Wi-Fi and Bluetooth connectivity along with a microUSB port. Finally, the unit is said to measure 78 x 76.40 x 24mm and weigh 108 grams, and judging by the official teaser images shared by the company, it seems to be equipped with a screw thread at the bottom edge designed for tripod attachments.

It’s also worth noting that this is not the company’s first 360-degree camera, and the Xiaomi Mi 360° Panoramic should not be confused with the Xiaomi 360 Smart IP Camera which is primarily designed for stationary use and as a home security system. Either way, prospective buyers should look forward to the Xiaomi Mi 360° Panoramic launching in China tomorrow – April 6 – for the price of 1,699 yuan, which translates to roughly $246 at today’s conversion rate. The product will be available for purchase from the Xiaomi Mall and the Mi Mall, as well as through the company’s various official retail partners in China including Lynx, Jingdong, and Suning. There’s currently no word regarding its availability outside of China, but more details on the matter might be revealed later this year. 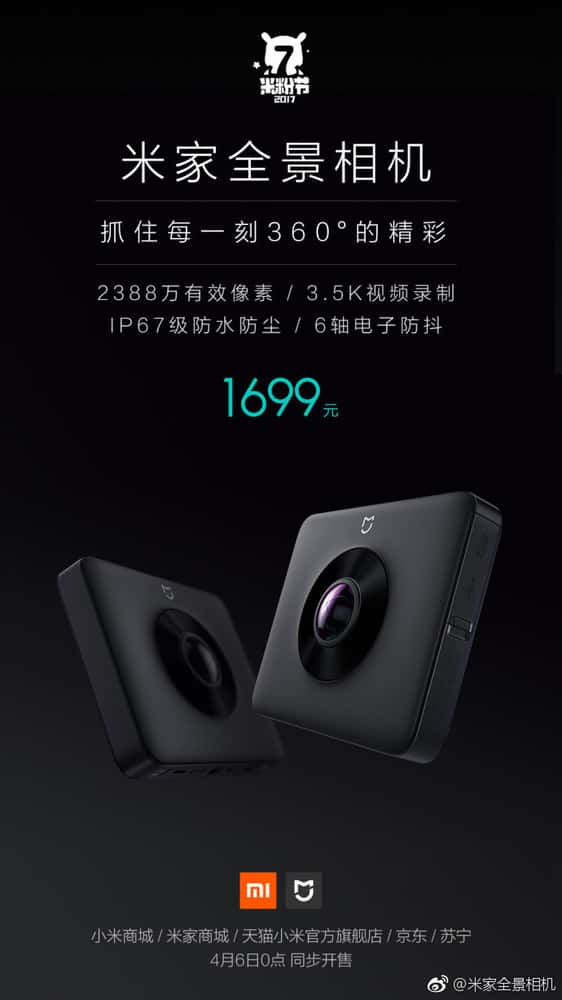