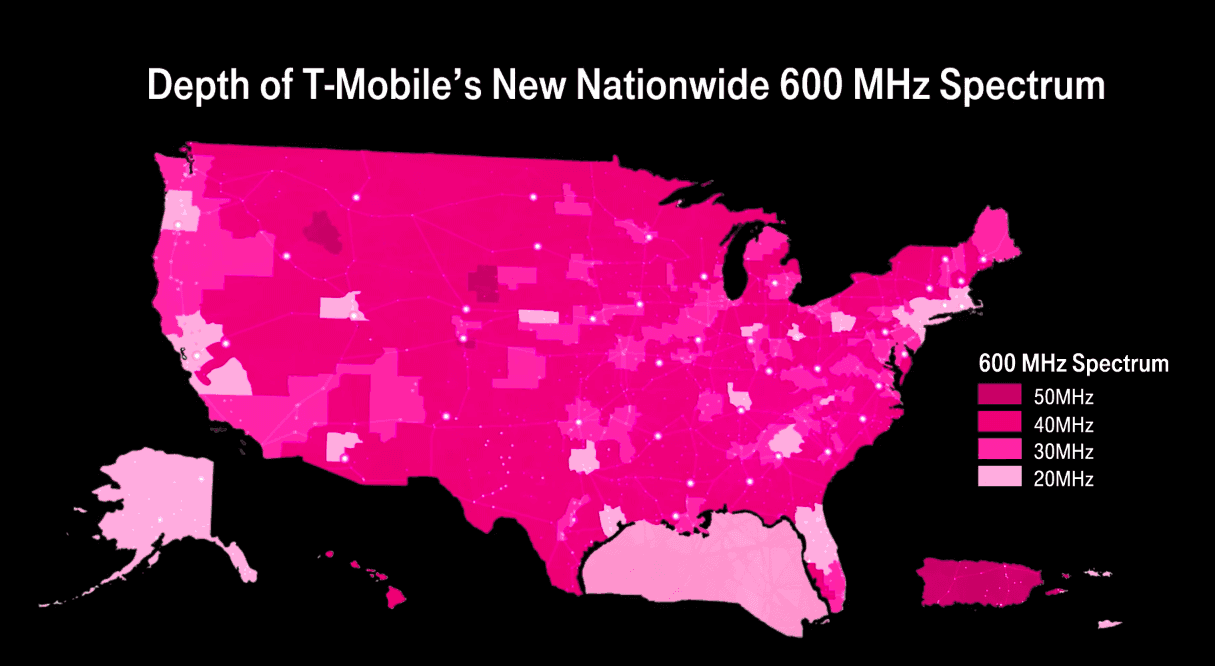 Leading up to the Incentive Auction, T-Mobile had been touting that they were going to essentially clean house in this auction. Seeing as they had the least amount of low-band spectrum, they needed this spectrum more than their competitors and they showed up in a big way. T-Mobile announced that they picked up 45% of the spectrum that was auctioned off, which is more than any other carrier in the auction. Also an interesting tidbit from the FCC here is that Verizon, despite being in the auction, opted not to bid on the spectrum.

With all of this 600MHz spectrum, T-Mobile basically has the entire country covered. The map you see above is what T-Mobile's network coverage will look like with the newly added 600MHz spectrum. Now keep in mind that rolling this out will take a couple of years. Number one, the TV broadcasters need to clear them, then send it to the FCC before it even gets into the hands of T-Mobile. Then T-Mobile needs to build it out. But, T-Mobile has stated that they will not be doing this slowly, and that they will have some 600MHz markets up by the end of 2017. This auction quadrupled the carrier's low-band spectrum portfolio, which is a big deal, and combining this 600MHz with the 700MHz they already have, you're going to see much improved signal from T-Mobile.

T-Mobile spent a whopping $7.99 billion in this auction to pick up all of this spectrum, and it's going to be a big deal for customers. With them picking up an average of 31MHz nationwide, they have plenty of space to build out their network and add even more customers. There are still plenty of spaces where T-Mobile doesn't have great coverage, but once they get their 600MHz spectrum rolled out, there will be even less. Low-band spectrum is a huge deal because it means that you get better coverage indoors, but also it offers more coverage from tower to tower. Where high-band spectrum is better with bandwidth, low-band's strength is in coverage. This is going to help T-Mobile really bring it to their competition.