Skip to content
Advertisement
Trusted By Millions
Independent, Expert Android News You Can Trust, Since 2010
Publishing More Android Than Anyone Else
2
Today
2
This Week
2
This Month
6765
This Year
124284
All Time
Advertisement

Spotify could be looking to get into the wearables market according to a new job listing that showed up on their careers page, although it is worth noting that the listing no longer seems to be posted to the career board, so it’s possible that Spotify may have taken it down at this point. However, you can see the image below that shows Spotify was and probably still is looking for a person to fill the role of Senior Product Manager for Hardware. Now this doesn’t exactly mean that Spotify is looking to enter the wearables market just by the name of the role alone, but included in the details of the role in regards to what the person would be responsible for, Spotify mentions that whoever takes on the position would be working with a team to deliver a product directly from Spotify, which they state would be comparable to something like the Pebble smartwatch.

That piece of information is what suggests Spotify is entertaining the idea of a wearable of some kind, though whether or not their idea will change or shift is unclear, and it’s entirely possible that while they may carry through with this product it could transition from something like the Pebble into something completely different, for example something not worn on the wrist.

In addition to the Pebble, Spotify also mentions that this particular product could also be similar to the Snap Spectacles as well as the Amazon Echo, so what they may have in mind could be a wearable that incorporates elements of all of these devices. A wearable that has the ability to take pictures and feed notifications, but could also have an AI assistant built-in, or at least have similar qualities but not necessarily a fully functioning version, which would allow the user to talk to it and initiate or complete varied tasks and/or functions. Whatever the product ends up being it will have the ability to connect to the internet and users should be able to talk to it, but as it would be coming from Spotify it will also likely have some music-related features, and will probably integrate with Spotify’s music streaming service. Since Spotify seems to just now be looking for someone to fill this role at the company there’s no telling how long it might be before they release such a product. 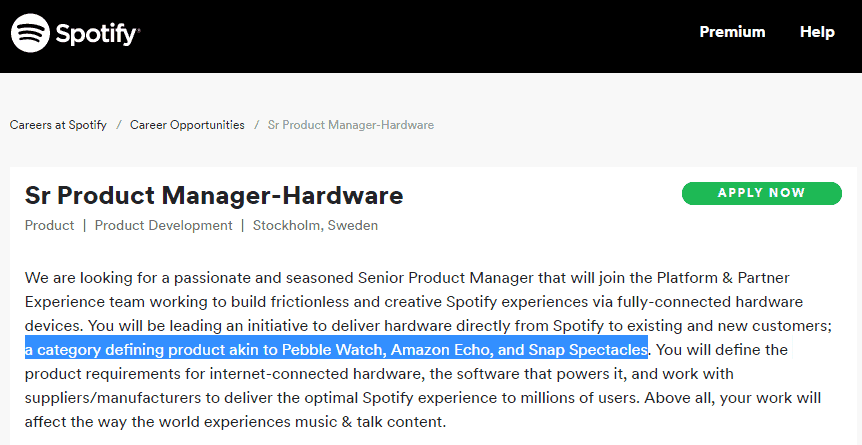