New forks of GNU/Linux come out all the time, but some, like the newly unveiled Project Halium, actively seek to unite a given landscape. In this case the mobile world. Rather than being yet another version of Linux on mobile devices, like SailfishOS or Ubuntu Touch, Project Halium’s goal is to create a base that anybody can work off of to integrate all sorts of Linux code into the Android stack smoothly. Ideally, Project Halium wants to not only build out a base framework that anybody can use to hook their Linux project into Android’s soft underbelly of code and run it on an Android device, but they want to be the de facto example of such, in much the same way that saying the word “Linux” out in public will make many people immediately think of Ubuntu.

Halium is a bit different in how it handles hooking into Android, and that difference is crystallized in the Hardware Abstraction Layer, or HAL, the project’s namesake. The HAL, to put it as simply as possible, is a full-service Android to Linux integration stack, meant to run Linux code through the Android kernel and binary blobs in one fell swoop, leaving the floor open for Linux code. Essentially, it’s the one stop shop at the core of the project. Halium’s goal is indeed to build just such a base, but that’s not where Halium ends. The project expands from there to make it as easy as possible for Linux developers to get their code under Android’s skin. Common hardware layer features like the camera interface are typically not open-source from the manufacturer, so Halium is going to be creating standardized, open-source drivers that should theoretically work across hardware platforms with few issues. This part is far easier said than done, as anybody who’s ever developed a custom Android ROM for a phone whose manufacturer has not released the kernel source can tell you.

Project Halium is currently in the planning stage, and like any other GNU licensee, the code is open-source and freely available. In this case, it’s hosted on GitHub, where just about anybody can contribute to it by proposing a commit to the code. Project Halium should be thought of in the same vein as Arch Linux, but open and community-based; it serves as a baseline for other developers, or even users, to build upon in order to create their own perfect mobile Linux distro. Since no one distro could ever truly meet the needs of every use case out there, this is not only a great way to kickstart Linux development on Android-based hardware platforms, but also likely the closest thing to a true all-in-one mobile Linux that will ever exist. 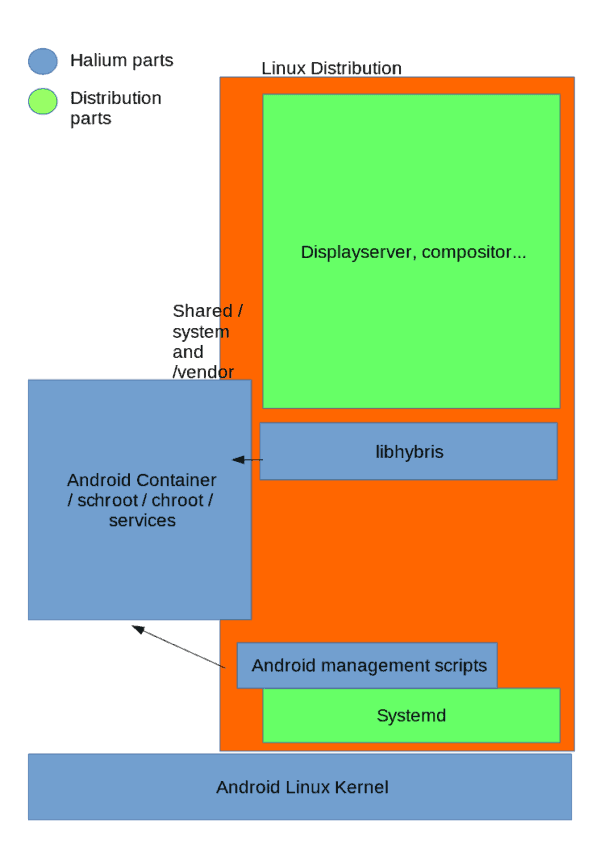