Do we have a good one for you today – the newest member of the LG family, the LG G6 takes on its older brother, the LG V20. These two devices could not be more different in looks with the LG V20 using a full aluminum body and the LG G6 using a full glass body with a metal frame. LG changed up their compete design approach with their new models and change the materials and looks of both devices quite a bit from their predecessor. Gone is the modular design of the LG G5 and gone is the removable battery as well. When it comes to their design and specifications, just how do these two smartphones stand up to one another. Let’s take a look and see just what these two devices have in common and then we will look at each one in greater detail.

We can start of by saying that the display sizes are identical at 5.7-inches, but the device’s physical dimensions are another story with the V20 being over 11mm taller and weighing in at 11 grams heavier than the G6. The V20 uses Gorilla Glass 4 for its display while the LG G6 uses Gorilla Glass 3 for the front and Gorilla Glass 5 for the back. The displays both use the IPS LCD technology, the same resolution except for the QHD+ on the G6 and its 18:9 aspect ratio. Both utilize an ‘always-on’ type display – the LG V20 uses a separate display and the LG G6 uses the true ‘always-on’ technology. They both use a Snapdragon processor and Adreno GPUs, but are different models when it comes to both. They both come with 4GB of DDR4 RAM and both have expandable internal memory. The camera areas both use a dual camera setup, but a different amount of megapixels. They both have Hi-Res audio circuitry and a rear-mounted fingerprint sensor for unlocking the device as well as Android Pay or other mobile purchases. While the LG V20 has a 3200mAh removable battery, the LG G6 has a fixed 3300mAh battery, both offer Quick Charge 3.0. The LG V20 and the LG G6 have the usual suspects – WiFi, Bluetooth v4.2, GPS, NFC, FM radio (market dependent) and the newer reversible Type-C port for charging and data transfer.

LG came out with the V10 last year when they brought out the LG G5 and had many users wondering what direction LG was trying to steer them. The difference between the LG V20 and LG G6 is a little more blurry than it was with the V10 and G5 as LG included dual cameras in the G6 and included a similar Hi-Res audio. LG did away with the angular look of the stainless steel LG V10 as the LG V20 is made from aircraft quality aluminum with a smoother and more refined look. Gone also is the silicone backing, but the silicone is still there as a pair of bumpers on the top and bottom of the LG V20. LG stuck with the secondary display for notifications, but the V20 has a much brighter secondary display than its predecessor does. The LG V20 is attempting to find a home for those users interested in experimenting with photography or that demand a great sound through their earphones. It is unthinkable that LG did not include stereo speakers with these kinds of audio specs.

For its notification delivery system, LG designed the V20 with two separate screens. The primary display sports a 5.7-inch IPS Quantum QHD panel with a resolution of 2560 x 1440 pixels and results in 513 pixels-per-inch (PPI). The secondary display for notifications measures 1040 x 160 pixels with the same density of 513 PPI. The purpose of these ‘always-on’ secondary displays is to save battery life by allowing the primary display to stay off while the smaller display feeds you notifications. LG put in the best possible processor at the time the V20 came out – the Snapdragon 820 quad-core processor that uses dual cores clocked at 1.6GHz and 2.15GHz. The LG V20 packs 4GB of DDR4 RAM and an expandable 64GB of faster UFS 2.0 internal storage.

The LG V20 uses what is becoming more of a standard item, a dual camera arrangement that includes a 16MP primary camera and another 8MP wide-angle lens that acts as a secondary camera. The 16MP will be your main shooter for most shots, but those times you to take a group or landscape shot, the 8MP wide-angle sensor can step in and help you out. For the V20, LG included both laser and phase detection autofocus (PDAF), added a large f/1.8 aperture on the primary camera and smaller f/2.4 for the secondary 8MP sensor, it has OIS, and a dual-tone LED flash. The front-facing camera (FFC) uses a single 5MP sensor with an f/1.9 aperture for social selfies or video chatting with friends and family. LG increased the battery size of the V20 by packing a 3200mAh removable battery that should last you throughout the day. The user has the option of using Quick Charge 3.0 for a fast charge, or you can simply replace the old battery with a new one.

LG was certainly trying to target audio buffs by being the first to include four DACs (Digital-to-Analog Converters). The V20 has an EQ with left/right balance controls and includes B&O Play certification. You ears will thank you by this enhanced sound on a good set of earphones, but we still are wondering why LG only included one speaker on the bottom of the device when this setup just begs for stereo speakers. The second target audience was photography buffs with the dual camera setup. The LG V20 was awarded an MIL-STD-810G certification due to its rugged build. The V20 also kept the IR Blaster that was left out of the LG G6. The V20 measures 159.7 x 78.1 x 7.6mm and weighs in at 174 grams and cost about $600. The LG V20 is available in Titan and Silver, and it is running Android 7.0 Nougat out-of-the-box.

LG threw out the LG G5 when they designed the new LG G6, except in the processor, RAM, and memory areas. The LG G6 does away with the LG G5’s metal and modular body for a new sleek, all glass design with smaller bezels. The new sealed design of the LG G6 allows it to gain an IP68 certification, but it takes away one of LG’s most beloved virtues – the removable battery. To make up for that change, LG did increase the battery size from 2800mAh to 3300mAh and gave us the option of wireless charging. LG worked on the display by increasing it from 5.3-inches to 5.7-inches and gave it an 18:9 screen ratio to better watch videos, movies, and games, not to mention making it taller and slightly narrower to keep the physical size smaller. LG also tinkered with the camera area by keeping dual cameras, but changing their megapixels. Because of the same bezels, LG had to keep the fingerprint sensor on the back of the device. Let’s see if LG did enough to their LG G6 and see just how it holds up to the LG V20.

The LG G6 sports a larger 5.7-inch IPS LCD QHD+ display with a new 18:9 screen ratio making the display slightly taller and narrower. It includes the ‘always on’ feature to save battery life, in contrast to the LG V20 that uses a second display. The resolution is now set at 2880 x 1440 pixels with 564 PPI. This ratio gives you two perfect squares for on-screen multi-tasking and a more realistic view when watching movies and is now Dolby Vision/HDR10 compliant. LG is getting some criticism for not waiting for the new Snapdragon 835 processor and instead stuck with the 2016 Qualcomm Snapdragon 821 quad-core processor. It has dual cores clocked at 1.6GHz and another dual-core clocked at 2.35GHz. According to Qualcomm, the SD821 should have increased speed up to 10-percent over the SD820 in the LG G5. That processor uses the same Adreno 530 GPU for graphics found in the LG G5. The LG G6 packs the same 4GB of DDR4 RAM and 32GB of internal memory that is expandable to 2TB via a microUSB card.

LG likes to use dual cameras – read about them on the LG V20 – so it is no surprise that the G6 still has dual cameras – however, they did change the megapixels of both cameras. The primary camera comes with a 13MP sensor and the secondary camera is also 13MP with an ultra-wide-angle using a 125-degree sensor. The LG G6 primary shooter comes with an f/1.8 aperture, PDAF, OIS, and dual-tone LED flash for normal picture taking. Again, for capturing a wider group shot in the photo or a landscape, they can use the 13MP ultra wide-angle lens with a fixed focus and an f/2.4 aperture. LG lowered the FFC from an 8MP to a 5MP FFC with an f/2.4 aperture for selfies and video chatting. The battery size increased from a removable 2800mAh to a non-removable 3300mAh with Quick Charge 3.0 and this time around, LG was able to add standard wireless charging due to the glass back.

LG had to keep the fingerprint sensor on the back of the device in order to keep the bezels to a minimum. The good news is that LG kept the same arrangement as last year so the fingerprint sensor still acts as an on/off switch. LG G6 did away with its IR Blaster, but kept the FM radio around in certain markets. It is the first non-Google device to incorporate Google Assistant into the device so if you are into Google Home and Chromecast then you can use your G6 to communicate in your Google ecosystem. The LG G6 measures 148.9 x 71.9 x 7.9 mm, weighs in at 163 grams and comes in Mystic White, Astro Black, or Ice Platinum. The device is available on all the leading carriers for about $700 for 32GB. 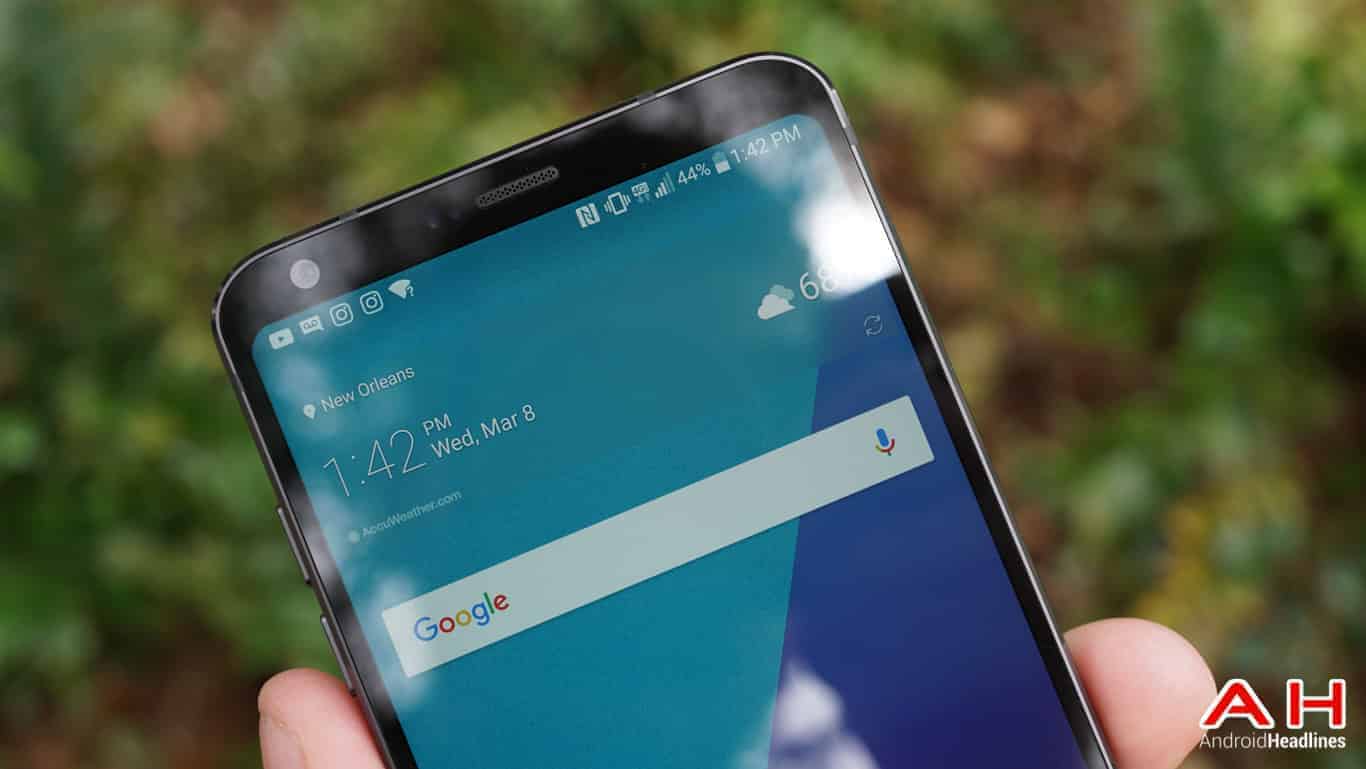 This is really a tough one, and it comes down to what you are looking for in a smartphone. Specification-wise, the LG G6  is the winner in this comparison – though not by a large margin, as the they use the same processor, but the LG G6’s is on steroids and they use the same GPU. The G6 does have a 18:9 aspect ratio, two 13MP cameras rather than one 16MP and one 8MP, IP68 certified, and wireless charging. It is also the sleeker looking device with smaller bezels and should be easier to hold.

The LG V20 has the aluminum look that many people like, and it should have better sound, more base (64GB) memory, removable battery, and does qualify for the MIL-STD-810G certification.

Your selection here is going to be based on which one ‘looks’ the nicest to you and if you feel the few added goodies of the LG G6 is worth the extra $100 it will cost you at the retailer. Both are great devices, and you should be happy with either one.