Do we have a good one for you today – the new LG G6 takes on the new Samsung Galaxy S8. Both of these devices are a total remake from their predecessors as LG and Samsung venture into new designs and innovative technology. LG left behind the notion of the modular LG G5 – an innovative and daring move at the time on LG’s part, but implementation and sales did not come close to their predictions. The new LG G6 has narrower bezels, an increased display size, an 18:9 screen aspect ratio, and did away with the long-prized removable battery, but added IP68 certification. Samsung abandoned the flat display for their flagship, increased display size, used an 18.5:9 aspect ratio, and crowned it their Infinity Display as they totally redesigned the look and feel of their Galaxy S8 series. These two new smartphones are looking to capture your attention and hoping for a purchase. Let’s take a look to see what these two devices have in common before we look at each on an individual basis.

With the display size almost identical, so are the physical dimensions, and even the weight with the LG G6 coming in at only 8 grams more than the Galaxy S8. Both devices use Gorilla Glass 5 for their back, while the LG G6 uses Gorilla Glass 3 for the front and the Galaxy S8 uses Gorilla Glass 5 all around. Both devices are IP68 certified for water and dust resistance and both have non-removable batteries with rapid and wireless charging available. The displays, while only 0.1-inch apart, use a different technology, but the same resolution and both utilize the ‘always-on’ display technology. They both use a Snapdragon processor and Adreno GPUs, but are different generations. They both come with 4GB of DDR4 RAM and expandable internal memory (32GB on the G6 and 64GB on th S8). The camera areas are very different, but both take great photographs. They both have Hi-Res audio circuitry and a rear-mounted fingerprint sensor for unlocking the device as well as Android Pay or other mobile purchases. The LG G6 and the Galaxy S8 have the usual suspects – WiFi, Bluetooth (v4.2 in the G6 and v5.0 in the S8), GPS, NFC, and the newer reversible Type-C port for charging and data transfer.

The new LG G6 looks and acts nothing like the LG G5 that it replaces. The LG G6 dropped the LG G5’s metal and modular body for a new sleek, all glass design. This new sealed design allowed the LG G6 to gain an IP68 certification, but took away the one jewel in LG’s crown – the removable battery. However, they did increase the battery size from 2800mAh to 3300mAh and added wireless charging in the process. LG increased the display size from 5.3-inches to 5.7-inches and gave it an 18:9 screen ratio. LG also tinkered with the camera area and kept the fingerprint sensor on the back of the device. Let’s see if LG did enough to their LG G6 to see how it stands up to the new Samsung Galaxy S8.

The LG G6 sports a new 5.7-inch IPS LCD QHD+ display and includes the ‘always on’ feature and a resolution of 2880 x 1440 pixels with 564 pixels-per-inch (PPI.) This gives the LG G6 an 18:9 screen ratio making the display slightly taller and narrower giving you two perfect squares for multi-tasking and a more realistic view when watching movies and is Dolby Vision/HDR10 compliant. LG did not want to wait for the new Snapdragon 835 processor, so they stuck with the 2016 Qualcomm Snapdragon 821 quad-core processor with dual cores clocked at 1.6GHz and another dual-core clocked at 2.35GHz. That processor is teamed with the impressive Adreno 530 GPU for graphics. The G6 packs the same 4GB of DDR4 RAM and 32GB of internal memory that is expandable to 2TB via a microUSB card.

Like the LG G5, the LG G6 has dual cameras that operate independently from one another. The first one is the primary 13MP sensor with an added extra 13MP ultra wide-angle 125-degree sensor. The LG G6 will use the primary 13MP shooter with an f/1.8 aperture, PDAF, OIS, and dual-tone LED flash to take a normal picture. However, if the user needs to capture a wider group shot in the photo or landscape, they will use the 13MP ultra wide-angle lens that as a fixed focus and an f/2.4 aperture. LG used a 5MP FFC with an f/2.4 aperture for selfies and video chatting. LG increased the battery size from 2800mAh to a 3300mAh with Quick Charge 3.0 and wireless charging is now standard.

Even though LG did away with the modular design, to keep the bezels small, they kept the fingerprint sensor on the back of the device. The good news is that the fingerprint sensor still acts as an on/off switch as it did on the LG G5. The LG G6 does not retain its IR Blaster, but the FM radio is still around for market areas. The LG G6 measures 148.9 x 71.9 x 7.9 mm, weighs in at 163 grams and comes in Mystic White, Astro Black, or Ice Platinum. The device is available on all the leading carriers for about $700 for 32GB and has Google Assistant built-in to the device. 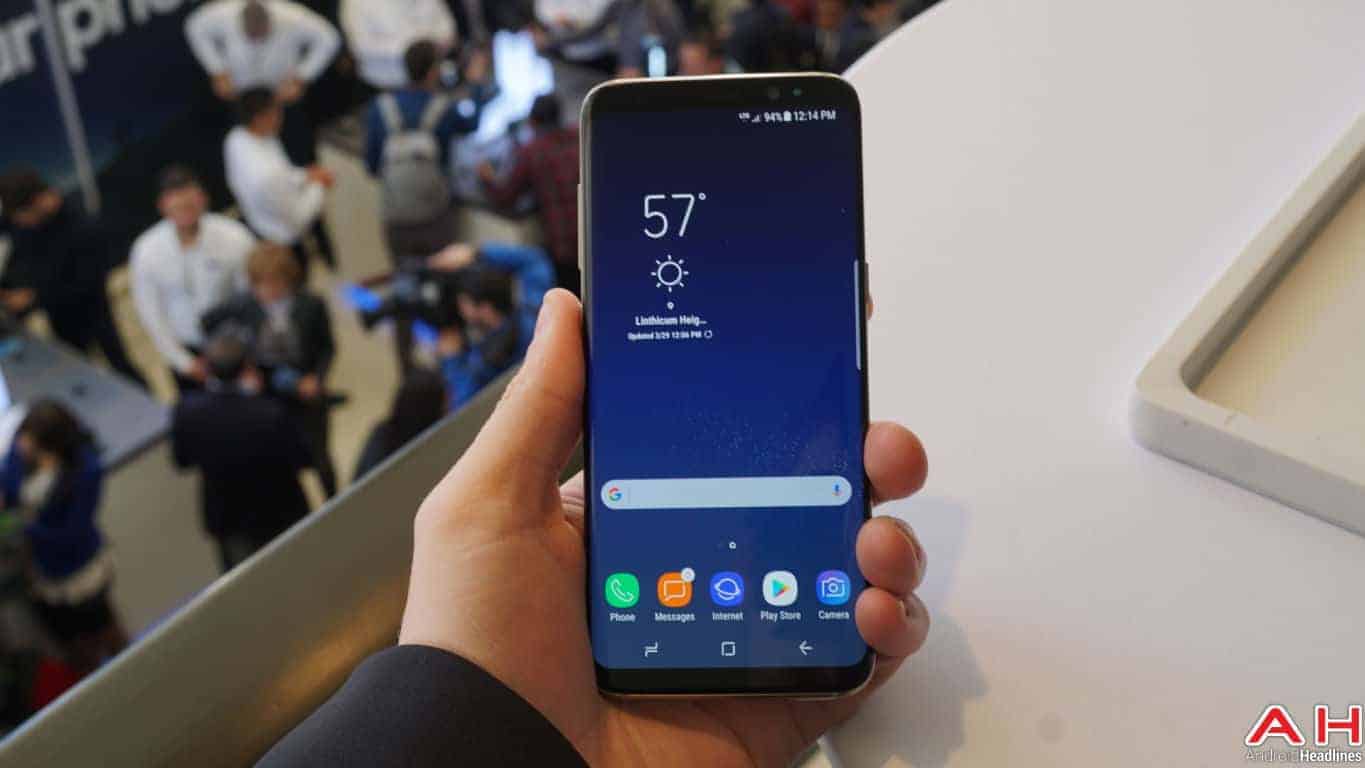 The new Samsung Galaxy S8 series will make you do a double take to make sure it is really a Samsung product. Although made with a glass backing like its predecessor, Samsung did away with the flat display of the Galaxy S7 and now uses what Samsung is calling their Infinity Display that seamlessly wraps around the sides of the device and meeting the back panel with essentially no gap. This design allows Samsung to squeeze much more display into a smaller area. Samsung did away with their physical ‘Home’ button that along with the ‘Back’ and ‘App’ keys now show up when you press on the lower part of the display – part of the 3D Touch area. The fingerprint sensor is located on the back near the camera lens, but Samsung also included facial recognition and an iris scanner to unlock your device. The new Galaxy S8 is as smooth and sexy a device you will ever find, but let’s check out the specs below to see where it stands with the LG G6.

The Galaxy S8 sports a 5.8-inch Infinity Display that uses Super AMOLED QHD+ technology with a resolution of 2960 x 1440 pixels and 570 PPI. Out of the box, the default resolution is set to 2220 x 1080 to help conserve battery life, but through the settings the resolution can be manually turned up to the maximum. Samsung chose to use an aspect ratio of 18.5:9 – this makes it taller and a little narrower, but because of its edge-to-edge design, it takes up 83.6-percent of the front of the phone. The Galaxy S8 retains the ‘always-on’ screen to help save battery life and makes it easier and quicker to check notifications. Models of the Galaxy S8 sold in the US will use the newest Qualcomm Snapdragon 835 octa-core 10nm processor clocked at 2.35GHz and an Adreno 540 GPU. In other countries, the Galaxy S8 will use Samsung’s Exynos 8895 octa-core 10nm processor with four cores clocked at 1.7GHz and four cores clocked at 2.3GHz. The Galaxy S8 packs 4GB of DDR4 RAM and has as standard, 64GB of the faster UFS 2.1 memory and external expansion up to 256GB via a microSD card.

Samsung has been doing some interesting things in the camera area, although nothing when it comes to improving the lens from last year. Samsung said they instead concentrated on making advancements to their imaging software, keeping the same f/1.7, PDAF, LED flash, auto HDR and OIS. Samsung did make improvements to their FFC by increasing the size from 5MP to 8MP and adding autofocus for even better selfies while retaining the wide-angle lens, the same f/1.7 aperture, and Live HDR. The camera area should continue to take great pictures, but it is odd that the lenses were not improved. Samsung also kept the same sized non-removable 3000mAh battery that features Quick Charge and still offers Quick Wireless Charging.

The Galaxy S8 sports a heart rate monitor, oxygen saturation sensor, and Samsung Health has taken over for Samsung’s S-Health. Samsung is pushing its new Samsung Connect feature that ties together Samsung’s appliances, SmartTVs, thermostats and other IoT (Internet of Things). Samsung decide to try something that has not really worked out to well in the past for other manufacturers – the DeX Station that will interface the Galaxy S8 along with a monitor, keyboard, and mouse for a desktop experience. Samsung’s offers their form of Google Assistant by introducing Bixby. It is a lot like Google Assistant, but you can also involve the camera – point it at a historical building, it will tell you the history of the place or aim it at a sign in a foreign language, and Bixby will translate it for you. The Galaxy S8 can use Android Pay, but it can also use Samsung Pay, which will allow Galaxy S8 users to make mobile purchases just about anywhere they can swipe a credit or debit card. The Galaxy S8 will come with Android Nougat 7.0 and then a quick upgrade or it may possibly include 7.1 by release time. It measures 148.9 x 68.1 x 8.0 mm, weighs in at 155 grams, is available in Midnight Black, Orchid Gray, Arctic Silver, Coral Blue, and Maple Gold depending where you are located. The 64GB Galaxy S8 will cost about $720 outright and is now available for pre-order to be delivered by April 21. 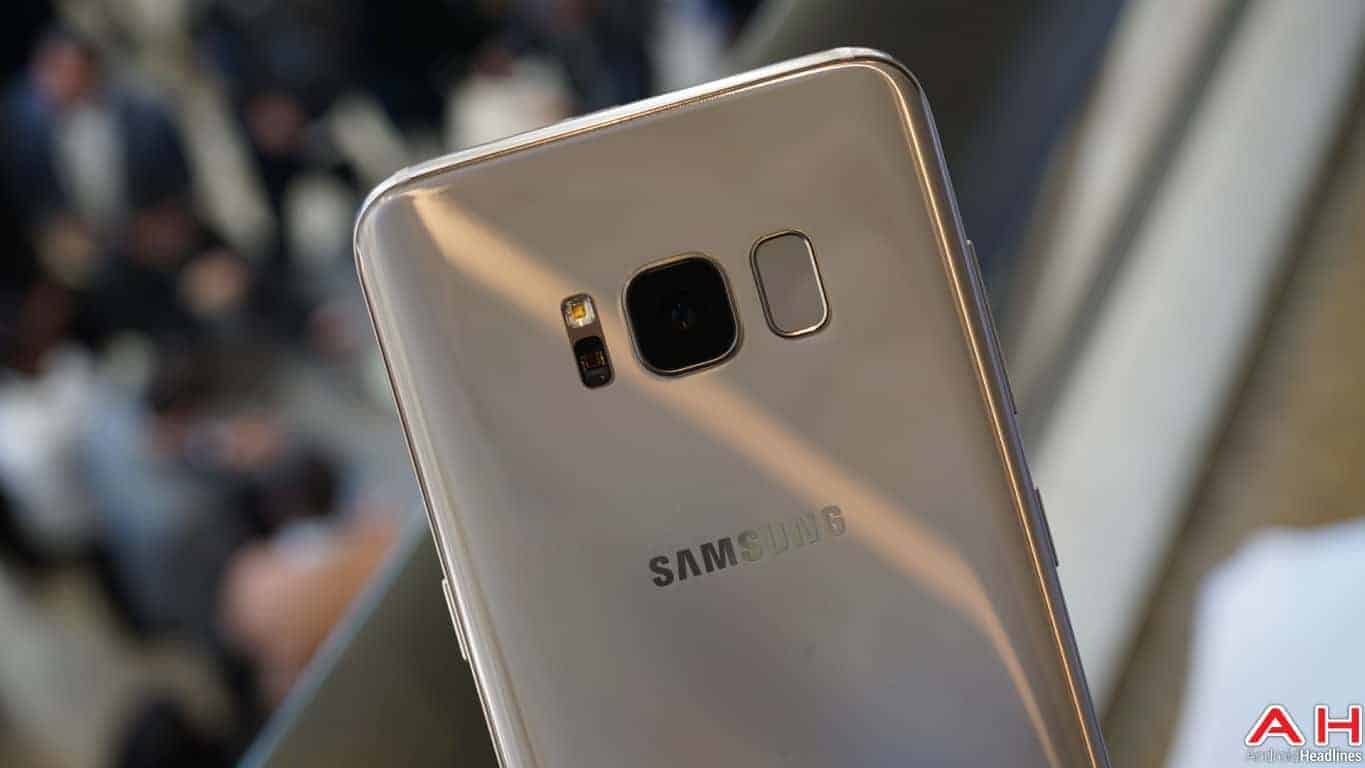 This decision ended up being a very easy one to make – the Samsung Galaxy S8 is the winner of this comparison. We can start with the overall design and looks of the Galaxy S8 with its Super AMOLED Infinity Display that not only looks sexy, but also has technical advantages being an AMOLED display. Next, we only need to look at the processor – the LG G6 uses a 2016 SD821 processor versus the new 2017 SD835 processor, not to mention the newer Adreno 540 with graphics upgrades. The Galaxy S8 packs double the standard memory, a larger, more refined FFC, newer Bluetooth, Iris scanner, Facial recognition, heart rate monitor, oxygen sensor, Samsung Health, Samsung Connect, Bixby, Samsung DeX, and Samsung Pay.

The Galaxy S8 does not have the LG G6’s dual camera, but you still get fantastic shots with the S8. You will not get Google Assistant on the Galaxy S8, but Bixby should serve you well. The  Samsung Galaxy S8 hit a homerun, and Samsung did it for only $20 more than the LG G6 – and for that extra $20, you get 64GB of memory rather than just 32GB found on the LG G6.