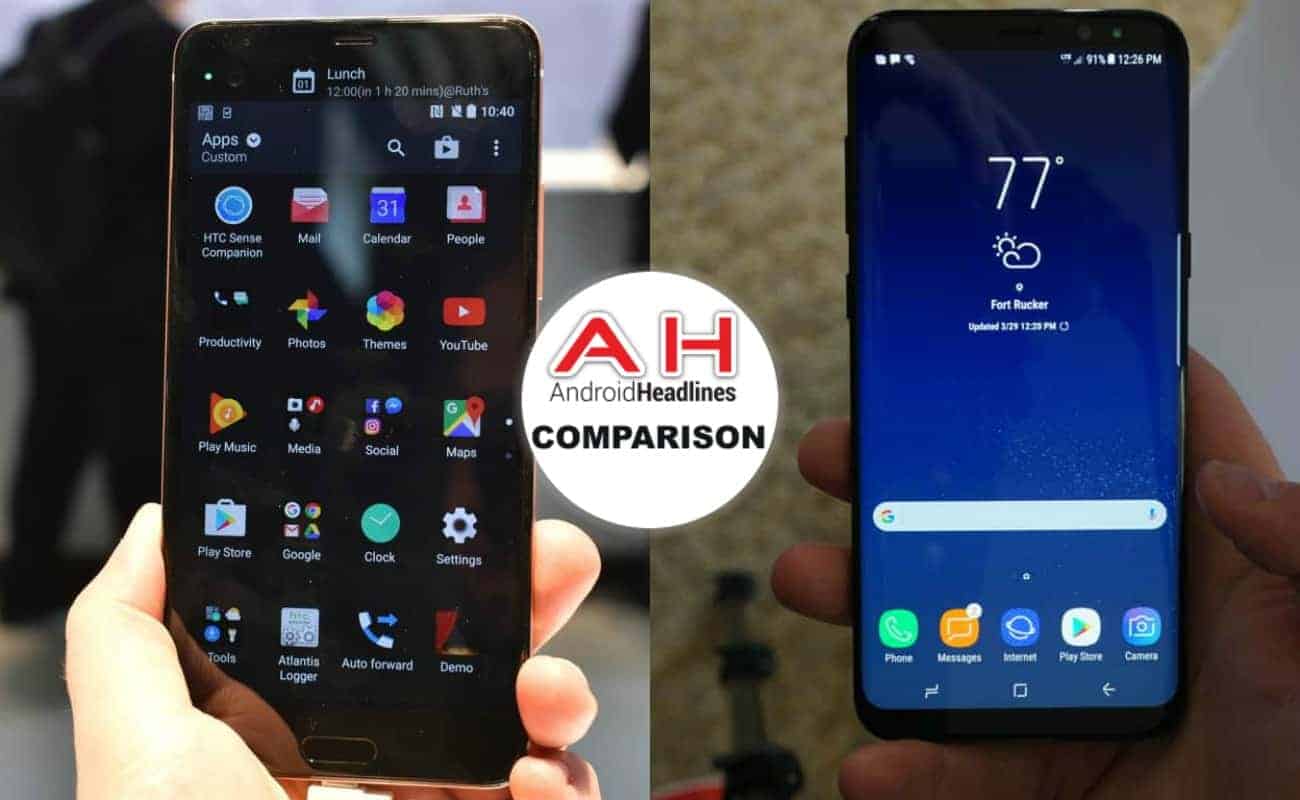 Do we have a good one for you today – the HTC U Ultra goes up against the Samsung Galaxy S8. HTC introduced us to the HTC U Ultra in between CES 2017 and MWC 2017 with little fanfare and advertising. The complete opposite is true for the Samsung Galaxy S8, but then Samsung has the money to promote its new flagships and it shows. Both devices use a glass front and back with a metal frame, but then they part company and go in different design directions. The HTC U Ultra looks like a traditional symmetrical smartphone whereas the Galaxy S8 looks more futuristic. The HTC U Ultra will only work on AT&T and T-Mobile in the US and the Galaxy S8 will work on all major carriers. Let’s see just what these two smartphones have in common and just how much they differ.

The HTC U Ultra and the Samsung Galaxy S8 do have a few things in common. For starters, they both use the same style construction of glass on the front and the back with a metal frame that holds everything together. Their displays are very close in size with the U Ultra using a 5.7-inch display and the Galaxy S8 using a 5.8-inch display. However, the U Ultra is physically much larger and 15 grams heavier. Both displays use the QHD resolution (QHD+ on the S8), but different technologies and they both have an ‘always-on’ feature. They both use a Snapdragon processor; although the U Ultra is using the older SD821 model and the Galaxy S8 uses the newest SD835. Both use an Adreno GPU for graphics, but again different models. They both are packing 4GB of DDR4 RAM and 64GB of base internal memory and both are expandable via a microSD card. Both devices offer an excellent camera area with 12MP main cameras – HTC uses UltraPixel 2, while Samsung uses Dual Pixels. They each have Hi-Res audio and a fingerprint sensor to unlock the device as well as to authorize mobile payments, including Android Pay. Both devices have a 3000mAh non-removable battery that includes rapid charge. They both have the usual suspects – WiFi, Bluetooth (v4.2 in the U Ultra and v5.0 in the S8), GPS, NFC, and a reversible Type-C port for charging and data transfer. They also are both running Android Nougat out-of-the-box. 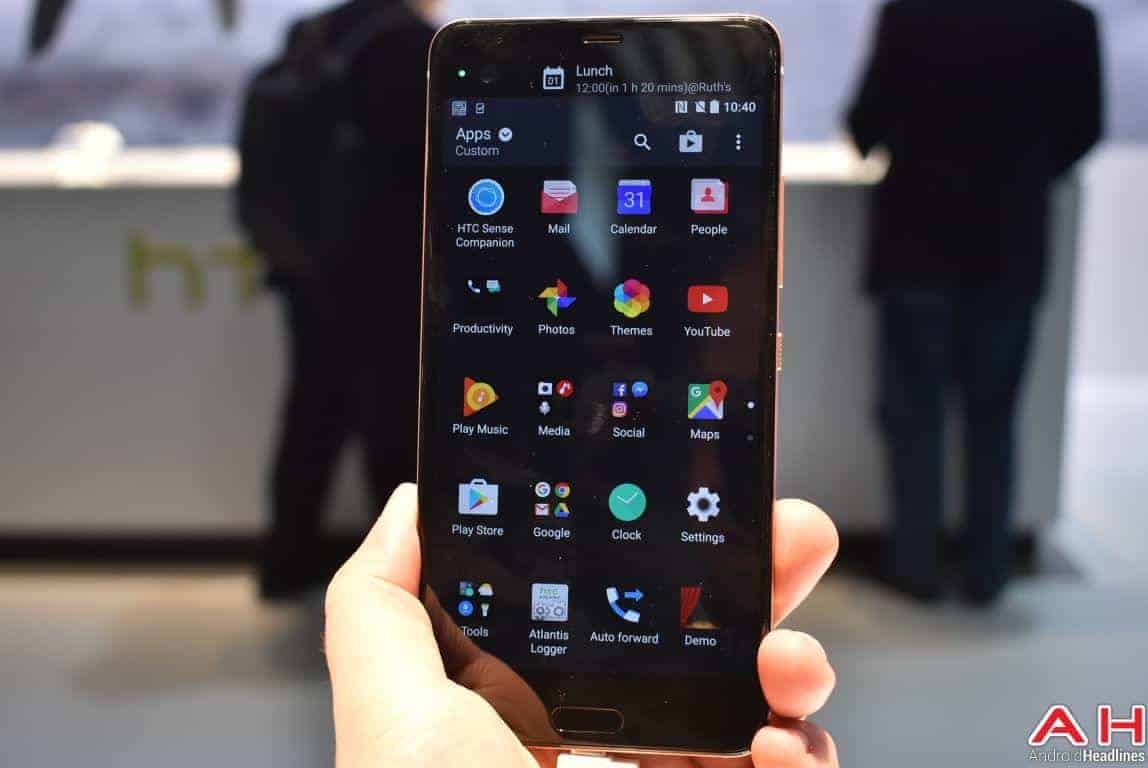 HTC, which has had many rough spots over the years, may have created another ‘pothole’ with their newest HTC U Ultra smartphone. They completely abandoned their signature all-metal housing and jumped into an all-glass design that is so shiny on the back, you may need a case just to ward off the fingerprints and to add some grip to the device. HTC, always in a hurry to release their device before LG and Samsung, made their announcement between the big electronic shows when nobody was listening and then took their good old time to physically release the device. It is using last year’s Snapdragon 821 and AT&T and T-Mobile are the only carriers it works on in the US – once again losing half a country of potential users. Make no mistake, the HTC U Ultra is a beautiful looking smartphone, but in an age where bezels are disappearing, we wonder just how well it will sell.

The HTC U Ultra sports a primary display of 5.7-inch Super LCD5 display with a Quad HD resolution of 2560 x 1440 pixels and 513 pixels-per-inch (PPI.) The secondary display is 1040 x 160 pixels (2.05-inches) and is used as a notification display – it acts like the dual display on the LG V20 or the ‘always-on’ display on the Samsung Galaxy S8. It is using the Qualcomm 821 quad-core processor with a dual-core clocked at 1.6GHZ and a dual-core clocked at 2.15GHz. This is really the SD820 on ‘steroids’ and packs 10-percent better performance according to Qualcomm. For graphics, it uses the very capable Adreno 530 GPU. It packs 4GB of DDR4 RAM and 64GB of base internal memory – a 128GB version is coming – and both will allow expansion of the memory via a microSD card.

HTC had always had problems with its camera area until last year when they put together the right parts and pieces to produce great photos. Not much has changed in the new HTC U Ultra that still uses the 12MP UltraPixel 2 sensor for their main camera along with an aperture of f/1.8, phase detection autofocus (PDAF) and Laser focus, a dual-tone LED flash, and OIS. They included a huge 16MP front-facing camera (FFC) that comes with an f/2.0 aperture, UltraPixel mode, Full HD 1080p, and offers excellent selfies and video chatting. It uses a large 3000mAh non-removable battery for power and has Quick Charge 3.0 capabilities.

A front-mounted fingerprint sensor will allow you to unlock your device or authorize mobile payments, including Android Pay. HTC will have its own version of Google Assistant, HTC Sense Companion, built into the device. HTC BoomSound Hi-Fi is also part of the HTC package. HTC also offers a complimentary UH OH Warranty for a 30-day no questions asked return and a one-year, one-time replacement for broken screens or water damage. The HTC U Ultra measures in at 162.41 x 79.79 x 3.6 – 7.99mm, and weighs in at 170 grams. In the box, you will receive a pair of HTC USonic Adaptive Earphones. HTC Connect is included for connection to items that use Chromecast, DLNA, Airplay, and Miracast Devices. It comes in Brilliant Black, Ice White, and Sapphire Blue. It will be running Android 7.0 Nougat out of the box and the 64GB will cost you about $749. 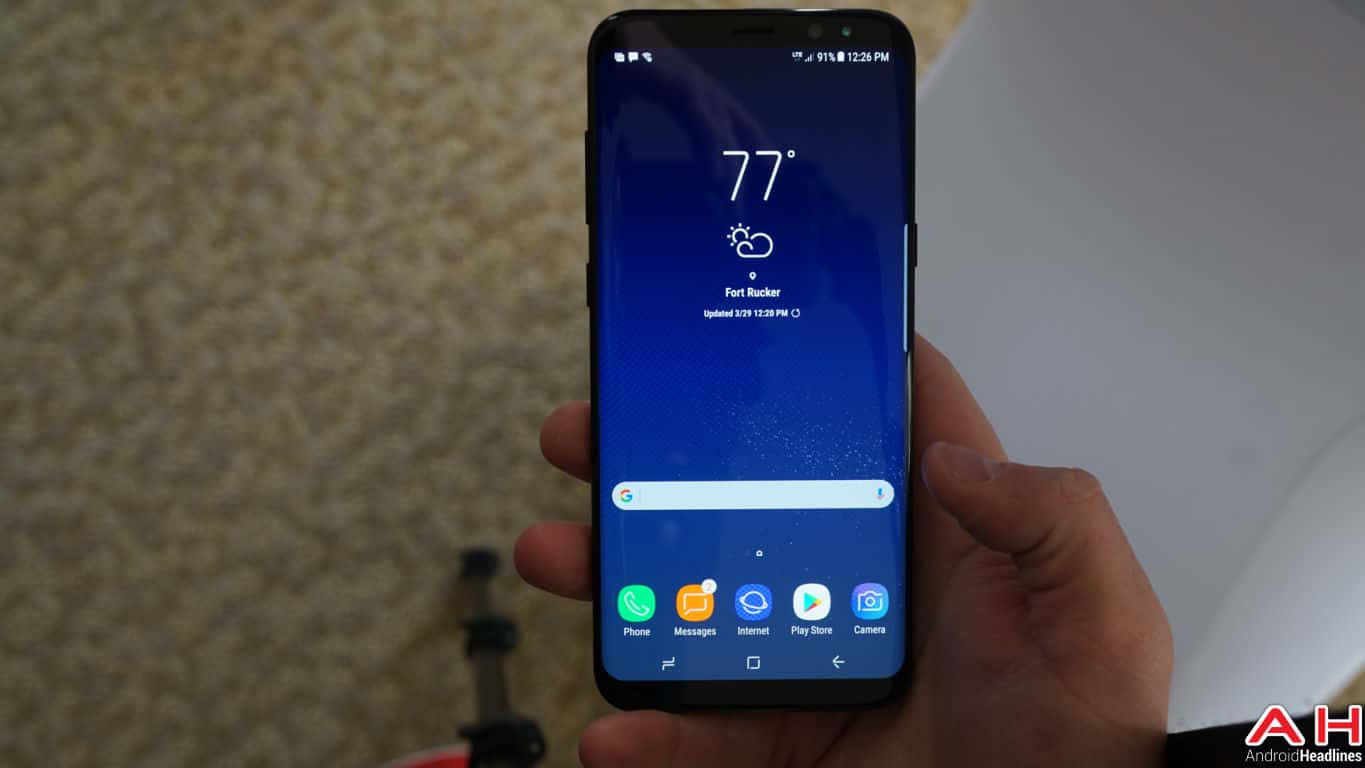 The difference between the looks of the Samsung Galaxy S8 and its predecessor is astounding – gone is the flat display and in comes their new Infinity Display that has no left or right bezels and allows Samsung to squeeze much more display into a smaller area. One of Samsung’s most talked about staples, the physical ‘Home’ button, is gone and along with the ‘Back’ and ‘App’ keys are now part of the lower part of the display that has 3D Touch capabilities. Although the fingerprint sensor is now on the back and located near the camera lens, Samsung gives us easier ways to unlock the device by way of facial recognition and an iris scanner. Just in the appearance alone, the Galaxy S8 is one sexy looking device, but what kind of specs does it supply with all of that beauty, and is it enough of a beast to topple the HTC U Ultra.

Samsung took a bold move and increased their Galaxy S8 to a much larger 5.8-inch Infinity Display compared to the 5.1-inch display used on the previous S series. Because the display uses an 18.5:9 aspect ratio that makes it taller and slightly narrower, it comes with a Super AMOLED QHD+ display and a resolution of 2960 x 1440 pixels and 570 PPI. The new display truly does go edge-to-edge and takes up 83.6-percent of the front of the phone. Samsung does set the default resolution to 2220 x 1080 to conserve battery life, but you can manually turn up the resolution to the maximum via the settings. Samsung continued the tradition of the excellent ‘always-on’ screen to help save battery life and to make it easier and quicker to check notifications. For durability, Samsung chose the newest Corning Gorilla Glass 5 to protect the display and back of the device. Samsung is the first to use the 10nm technology in the newest Qualcomm Snapdragon 835 octa-core processor clocked at 2.35GHz with an Adreno 540 GPU rounding out the model destined for the US. In other countries, the Galaxy S8 will use Samsung’s Exynos 8895 octa-core 10nm processor with four cores clocked at 1.7GHz and four cores clocked at 2.3GHz. The Galaxy S8 packs 4GB of DDR4 RAM and has 64GB of the faster UFS 2.1 expandable memory via a microSD card.

Samsung used the same camera from the Galaxy S7 with a Dual Pixel 12MP sensor with Samsung deciding to instead concentrate on making advancements to their imaging software. So far, the picture quality looks excellent, but in the war of smartphone cameras, it is very surprising to see no improvements in the hardware. The Galaxy S8 uses the same large aperture of f/1.7, a 26mm lens, PDAF, LED flash, auto HDR and OIS. Samsung did make some changes to the FFC by enlarging it from a 5MP to an 8MP sensor and then added its own autofocus. It retained its wide-angle lens, the same f/1.7 aperture, and Live HDR. Samsung also kept the same sized non-removable 3000mAh battery that features Quick Charge and still offers Quick Wireless Charging.

The Samsung Galaxy S8 has incorporates many features – some are noteworthy and others may never be used by most owners. It comes with a useful IP68 certification, against dust and water, a heart rate monitor, an oxygen saturation sensor, and Samsung Health replaces Samsung’s S-Health. Samsung’s new Bixby personal assistant is much like Google Assistant; however, Bixby involves the camera as well to answer your questions. If you point it at a historical building, you will get the history of the place or aim the camera at a sign in a foreign language and Bixby will translate it for you. The Galaxy S8 still sports and a new Samsung Connect feature to tie together Samsung’s appliances, SmartTVs, thermostats and other IoT (Internet of Things). Samsung added another feature that has never proven to be popular – a DeX Station that will interface the Galaxy S8 with a monitor, keyboard, and mouse for a near desktop experience. The Galaxy S8 can use both Android Pay as well as Samsung Pay, which allows Galaxy S8 users more freedom to make mobile purchases. The Galaxy S8 will come one of two ways – with Android Nougat 7.0, followed by a quick upgrade, or it may include 7.1 by release time. It measures 148.9 x 68.1 x 8.0 mm, weighs in at 155 grams, is available in Midnight Black, Orchid Gray, Arctic Silver, Coral Blue, and Maple Gold depending where you are located. The Galaxy S8 will cost about $720 outright and is now available for preorder with delivery no later than April 21. 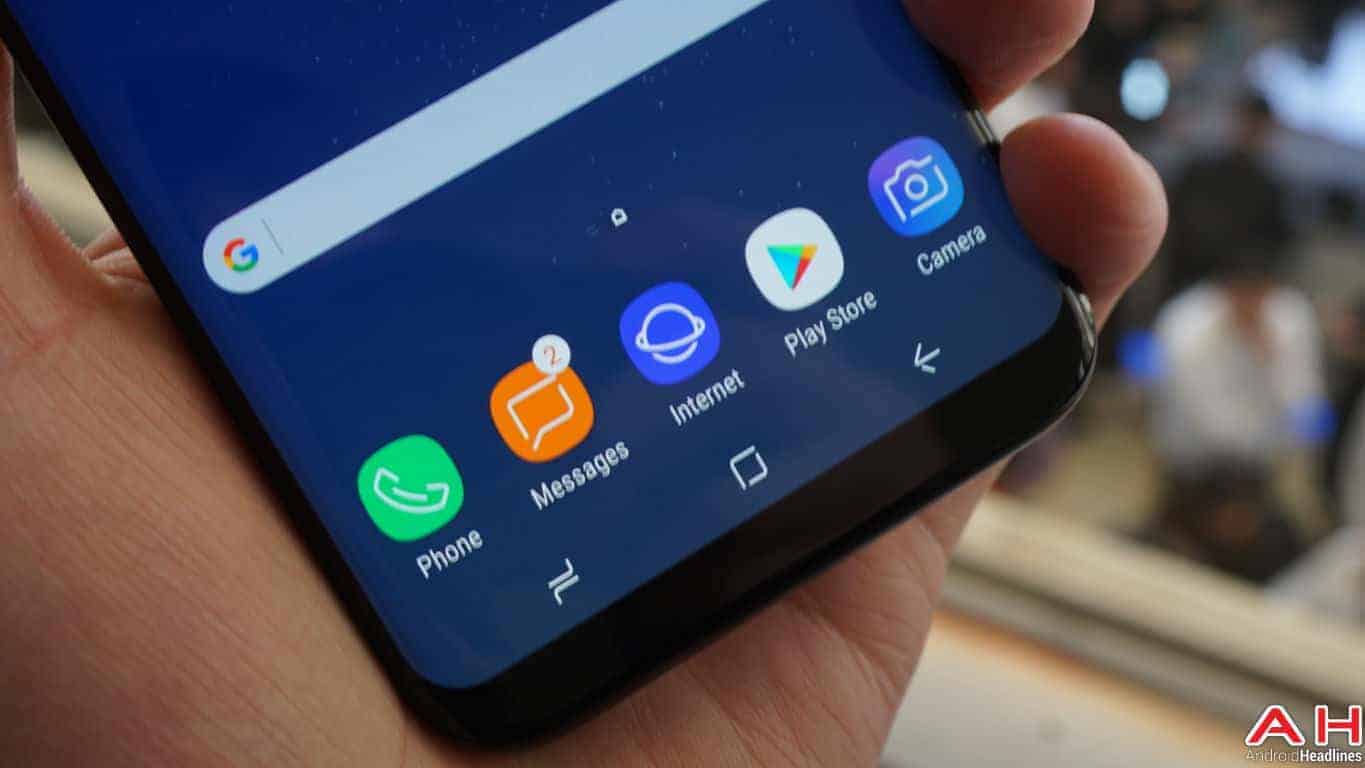 I have to give this easy win to the Samsung Galaxy S8 – not because it is a Samsung – but because it has the superior specs in just about all categories and the price for the Galaxy S8 is almost $30 cheaper than the HTC U Ultra.

The Galaxy S8 has a better display, much better processor and GPU, as good a camera area, same amount of RAM and memory, is physically smaller with a slightly larger display, Samsung Pay, IP68 certification, wireless charging, the same size battery, and is better looking if you must know.

The HTC U Ultra is a nice device and certainly has better sound than the Galaxy S8, but where else it tops the Samsung, I am having a hard time finding that weak area. If you take into account that the U Ultra costs more than the Galaxy S8, and offers less almost everywhere, it makes the Samsung Galaxy S8 the clear winner of this comparison.