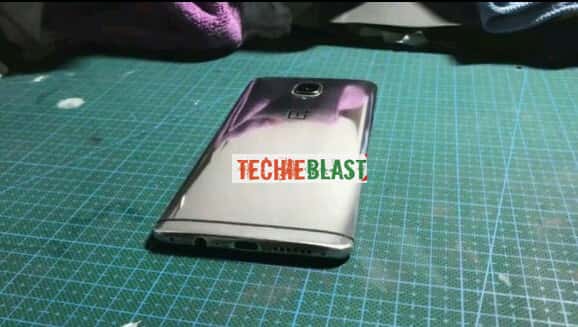 A chrome-colored OnePlus 3T unit has just surfaced online. Two images of this smartphone appeared, as you can see in the gallery down below, and this handset might be on the way. As you probably already know, the OnePlus 3T was originally introduced in two color variants, Gunmetal and Soft Gold. Well, the company actually released a special edition 'Colette' edition of the OnePlus 3T recently, and that phone is all-black. Soon after that, the company announced the 'Midnight Black' variant of the OnePlus 3T, which is essentially identical to the Colette edition of the phone, but does not sport Colette's branding on the back.

That being said, this chrome-colored OnePlus 3T could become the fifth option OnePlus has to offer in the near future, at least if this leak is to be believed. This variant of the device is, next to being the newest color option we're seen, also the shiniest one. Not many smartphone manufacturers decide to release such variants of their devices, Sony did it with the Xperia Z5 Premium a while back, but that's about it, at least if we look back a couple of years. Now, according to the report, the internals of this smartphone will remain unchanged, as was the case with the Colette and Midnight Black editions of the device, and the dimensions will remain the same as well. We still do not know what's the situation with the phone's internal storage though, will it sports 64GB or 128GB of native storage, but if this leak is legit, and OnePlus is planning to launch it soon, we'll find out all the details soon enough, so stay tuned for that.

The OnePlus 3T is a metal-clad smartphone which sports a 5.5-inch fullHD (1920 x 1080) Optic AMOLED display, 6GB of RAM and comes in both 64GB and 128GB internal storage variants. This smartphone is fueled by the Snapdragon 821 64-bit quad-core processor, while it ships with a 3,400mAh non-removable battery on the inside. A 16-megapixel OIS snapper is placed on the back of the OnePlus 3T, and the phone comes with Android 6.0.1 Marshmallow pre-installed, but as soon as you fire it up, you'll be able to upgrade to Android 7.0 Nougat.