The Nokia 6 is now receiving Android 7.1.1 Nougat update, at least according to the source. If you take a look at an image below this article, you’ll get to see a screenshot of this update. This screenshot was taken by Mr. Hyken Wong, and the update comes with the build number 00CN_3_170, while the update itself weighs 369MB (though you’ll need 616MB of free space in order to install it), in case you were wondering. HMD Global promised quick updates in general, both new Android versions and security patches included, and it seems like the company is fulfilling their promise.

As already mentioned, this update brings along Android 7.1.1 Nougat on your Nokia 6 device, which means that you’ll get pretty much every Android 7.1.1 Nougat improvement that came with a stock version of the software, as Nokia doesn’t really install heavy skins on their devices, those are almost stock builds. This means that you’ll get a new set of emojis, new power saving options, background management, etc. The Nokia 6 will also offer 3G / 4G dual-SIM, dual-standby support after this update, and you will also get April’s security patch along with this update. On top of all that, you’ll get a set of usual improvements as well, like bug fixes, optimizations, etc. Nokia seems to have updated their USB driver utility along with this update as well, which is always good to hear.

The Nokia 6 arrived back in January, but that was the Chinese variant of the device, while Nokia also announced a global model of the Nokia 6 back in February during MWC 2017. Now, this Android 7.1.1 Nougat update seems to be coming to devices that have been purchased in China, as the Nokia 6 is still not available to global consumers. There is no difference between the two phones really, they’re identical in almost every way, they do come with different bands for 3G / 4G connectivity, though, of course. The Nokia 6 is made out of metal, while it sports a 5.5-inch fullHD display, 4GB of RAM, and it is fueled by the Snapdragon 430 64-bit octa-core processor. The phone sports a fingerprint scanner below the display, and a 16-megapixel shooter on its back. Android 7.0 Nougat came pre-installed on this handset out of the box, but as you can see, the phone is now upgradeable to Android 7.1.1 Nougat. 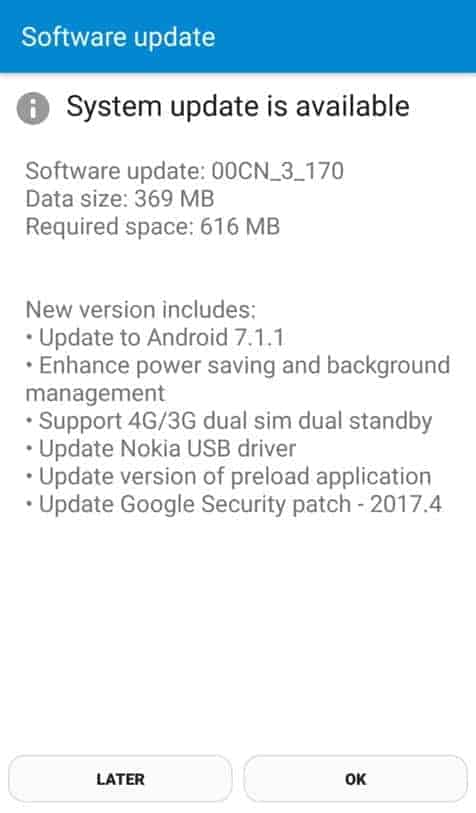