A leaked Sony Xperia X Ultra render is boasting an ultra wide display, suggesting that Sony will be the next major brand to push out a smartphone that has a screen with a taller and more narrow design similar to that of the LG G6 and Samsung Galaxy S8/S8 Plus that have recently launched. Right now there isn’t a whole lot of detail on this device in regards to features and specifications but there is some information about the hardware. Rumored specs accompanying the renders state that the display will be 6.45-inches in size which would be slightly bigger than that of the Galaxy S8 Plus, all while seemingly keeping things wrapped in a phone with a smaller footprint, though the actual size of the phone is not mentioned.

Judging by the images the Xperia X Ultra will have some pretty slim bezels which is what would allow the phone to have such a large display without being a large phone, though due to the way the images look it’s hard to make out just where the bezels actually are, save for the top bezel which looks like it will be a little thicker than the bezels on the sides and the bottom.

The phone comes in at least two different colors which includes a red and grey color, though knowing Sony it could be available in more than just two color options as they tend to launch three or four for many of their devices. Sony has always been known for their great smartphone cameras, and according to the rumor Sony will be using a 13-megapixel front-facing camera sensor while the main camera sensor on the back will be a 19-megapixel sensor. Like past Sony devices it’s said to come with an IP68 rating for dust and water resistance, and on the inside it will be powered by a Qualcomm Snapdragon 660 processor with 4GB of RAM and a 3050mAh battery with Quick Charge 3.0 support. Internally it’s said to have 64GB of storage, and it isn’t mentioned but it should have expandable storage support as well as this has been a staple of just about every smartphone from Sony. Right now there is no information on pricing or availability. 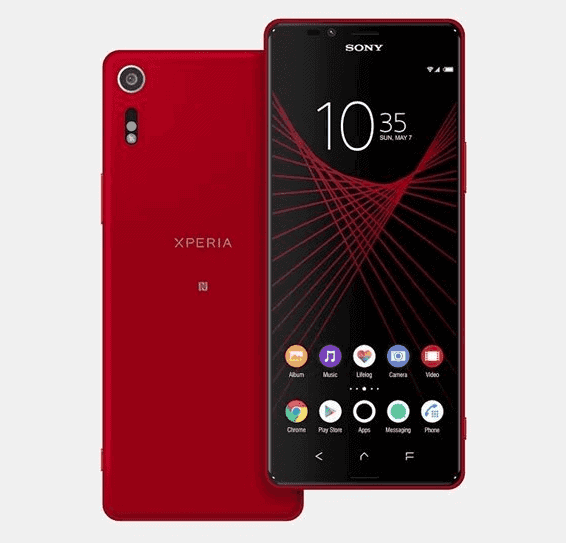