Meizu had announced that the Meizu E2 will arrive on April 26, and the device has now surfaced along with some of its specs and pricing info. If you take a look at the image above this article, you’ll get to see the back side of the Meizu E2. Now, interestingly enough, this phone looks different than the sketch Meizu shared in their Meizu E2 invite, does that mean this is fake? Well, it is possible that Meizu only shared a generic sketch of one of their smartphones in order to avoid giving out too much info, so it is possible that the leaked render is legit.

Now, as you can see, this phone is made out of metal, and it comes with a rather interesting camera design on the back. The Meizu E2’s camera and its dual-LED sensor are placed in the upper left corner of the device, and are protruding a bit it seems. The company’s logo is placed on the back of the phone as well, and the device’s antenna bands are also visible here. Now, a hands-on video with the Meizu E2 is available down below, and it is showing off this phone in action. You will notice that the home key / fingerprint scanner is placed below the display, which was to be expected considering this is a Meizu-branded handset. The phone’s loudspeaker is placed on the bottom, and so is a Type-C USB port. Now, unlike the Xiaomi Mi 6 which was announced yesterday, the Meizu E2 sports a 3.5mm headphone jack, and it is also located on the very bottom of the device.

According to the leaked spec sheet, the Meizu E2 will arrive in both 32GB and 64GB storage variants. The 64GB variant of the device will ship with 4GB of RAM, though we do not know much will it cost. The 32GB model is expected to come with 3GB of RAM, and it will, allegedly, cost 1,699 Yuan ($247). The Meizu E2 is expected to sport a 5.5-inch fullHD (1920 x 1080) display, and a 13-megapixel camera on the back. A 5-megapixel snapper will be included on the phone’s front side, and an octa-core SoC will fuel this phone, though we do not know which one just yet. 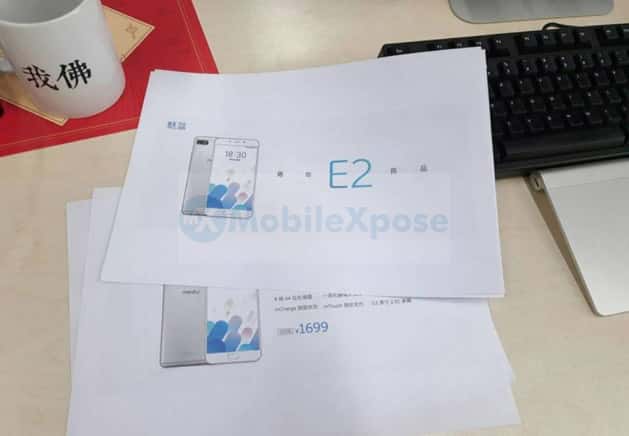