Some T-Mobile customers that pre-ordered the Samsung Galaxy S8 or Galaxy S8 Plus may be getting a pleasant surprise today, as it seems notices are being sent out advising that their phones have shipped out already. A full five days ahead of the projected shipping date that T-Mobile originally gave customers. An example of one of the notices is shown below and simply states that the devices have made their way out from T-Mobile’s processing centers and onto mail trucks. At the moment, it is unclear how widespread the notices are and whether there is any particular order or logic behind who is receiving them. So it is probably just a case of keeping your eye on your inbox to see if you have a similar email – assuming you did order either of the two devices form T-Mobile.

T-Mobile had previously told customers that pre-orders would be shipping out on or about the 19th of April, which could still potentially put the phones in customers’ hands a day or two ahead of the April 21 street date, depending on how long it takes for the phones to go from shipped out to being at customers’ doors. Although, deliveries could inevitably be slowed due to the Easter holiday, or inclement weather, of course. There is also no information on how many customers or what types of pre-order shipping options are being shipped out early. The early shipping could simply be a way for snail mail customers to receive their devices at around the same time as customers who ordered with other, faster options.

T-Mobile made a similar move around this time last year when the Galaxy S7 and Galaxy S7 Edge dropped, getting devices out to pre-order customers well ahead of the March 11, 2016 street date. T-Mobile customers aren’t the only ones who may get a chance to play with their new toys before the general public; pre-order customers across Canada are apparently getting theirs early as well, and since we’re still a week out from the official release date in most regions where the phone will be sold, there’s still plenty of time for others to announce that they plan to follow suit and ship out units to customers early. 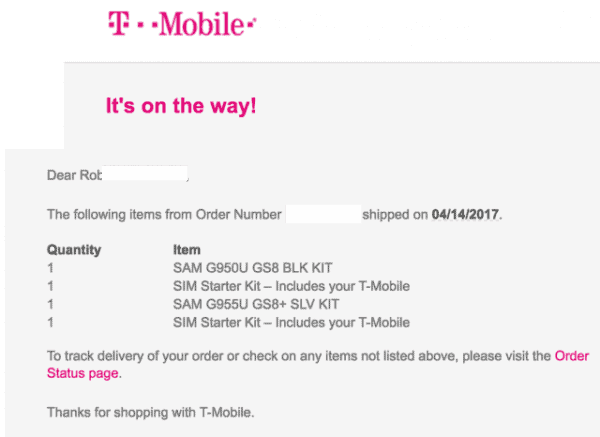