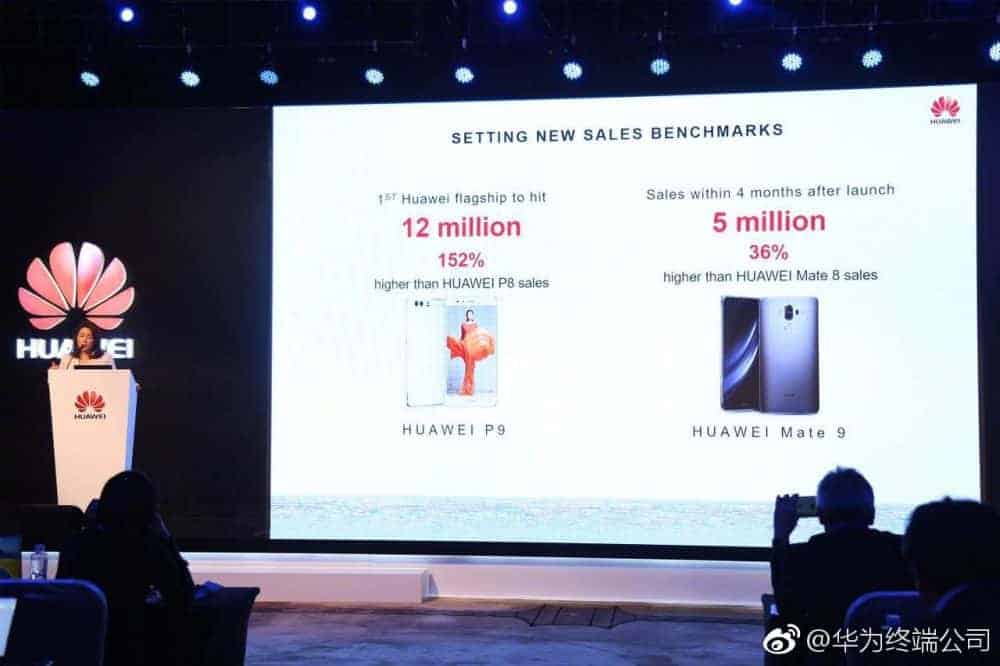 Huawei has just shared some interesting information on their official Weibo (Chinese social network) page. The company shared sales numbers for the Huawei Mate 9, in order to reveal how well they’re doing when it comes to their flagship phablet. Huawei is now the third largest smartphone manufacturer in the world, and they managed to sell 5 million Huawei Mate 9 units thus far, 4 months after the device launched. Such numbers actually represent a 36% increase over the Huawei Mate 8 sales in that time period, in case you were wondering.

The Huawei Mate 9 was announced back in November, and this handset is still one of the most powerful out in the market. Now, it’s also worth mentioning that the company’s Huawei P9 and P9 Plus devices are also doing great, which is something Huawei announced last month. The company managed to sell 12 million of Huawei P9 units since they launched, and that is their first flagship to hit such high sales number. Will the Huawei Mate 9 be able to crush Huawei P9’s sales numbers? Well, that’s not as likely, as Huawei’s P line of devices is more popular than their Mate line it seems, at least for now. The Huawei P10 and Huawei P10 Plus, which launched back in February, could challenge the Huawei P9, though. Such high sales numbers for the Huawei P9 and Huawei Mate 9 are not all that surprising, all three of those phones (Huawei P9, Huawei P9 Plus and Huawei Mate 9) have been available in a number of markets, and are usually more affordable than some other flagship offerings out there.

The Huawei Mate 9 is actually a really powerful smartphone, it is made out of metal, and it comes with a rear-facing fingerprint scanner. This behemoth sports a 5.9-inch fullHD (1920 x 1080) display, along with 4GB of RAM and 64GB of expandable storage. Huawei’s HiSilicon Kirin 960 64-bit octa-core processor fuels this smartphone, and a 4,000mAh battery is also included in this package. There are two cameras included on the back of the Huawei Mate 9, and the phone comes with Android 7.0 Nougat out of the box, with Huawei’s Emotion UI (EMUI) 5.0 skin on top of it. Read our full review of this smartphone if you’d like to know more.