The Xiaomi Mi Pad 3 tablet became official earlier this month when the company introduced it in China, though the company did not reveal what version of Android is running on it. Well, the Xiaomi Mi Pad 3 just surfaced on GFXBench, and it seems like Android 7.0 Nougat comes pre-installed on the Mi Pad 3. On top of Google’s operating system, you’re also getting Xiaomi’s MIUI 8 OS, of course, and MIUI 9 will launch later this year, and almost certainly land on the Mi Pad 3 at some point in time.

Now, in addition to revealing which version of Android is the Xiaomi Mi Pad 3 running, GFXBench’s listing does not reveal all that much. GFXBench is sharing the Xiaomi Mi Pad 3 specs, but there’s nothing new here, and even the SoC info is a bit wrong, the SoC model is spot on, but the core count is completely wrong on GFXBench. The MediaTek MT8176 is a hexa-core processor, not a deca-core one, as GFXBench leads us to believe. The Xiaomi Mi Pad 3 is made out of metal, and comes with a set of three capacitive buttons below its display. This tablet comes with a 7.9-inch 2048 x 1536 display, 4GB of RAM and 64GB of native storage. GFXBench claims that there are two 12-megapixel cameras on the back of the Xiaomi Mi Pad 3, while in fact, you can find only one camera on the back of Xiaomi’s all-new tablet. Now, this listing could indicate that the Mi Pad 3 with a dual camera setup is on its way, but that’s highly unlikely, as this tablet seems to be identical to the one Xiaomi released earlier this month in terms of specs, and camera sensors are not exactly all that important on a tablet, especially rear-facing ones.

There you have it, now we know what OS version is the Mi Pad 3 running. That being said, Xiaomi actually introduced their Xiaomi Mi 6 flagship earlier today, for those of you who are interested. The Xiaomi Mi 6 is made out of metal and glass, though a ceramic variant will also become available, as that variant was announced today as well. The Xiaomi Mi 6 goes on sale on April 28, while the Mi Pad 3 is already available in China through the company’s official website, Jingdong Mall (JD.com) and Suning. 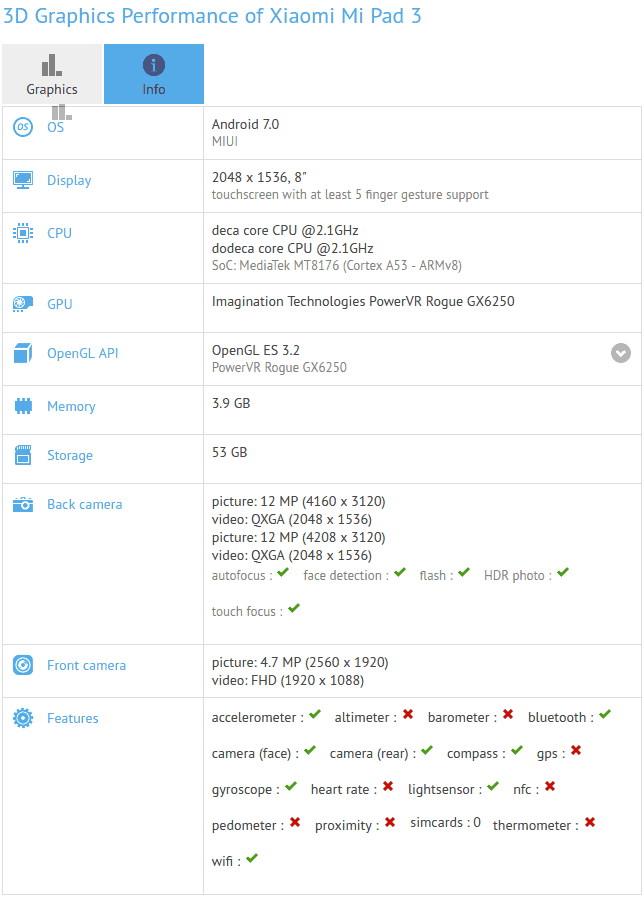