The Samsung Galaxy S6 and Galaxy S6 Edge have already received the Android 7.0 Nougat update in several regions including Europe, and now the duo is apparently enjoying the same treatment in India, according to a recent report passed along by Fonearena. The software package for the Samsung Galaxy S6 carries build number “G920IDVU3FQD1” and weighs 1.23GB, while the update for the Samsung Galaxy S6 Edge is identified as build number “G925IDVU3FQD1” and has a size of 1.24 GB. Feature-wise, the update brings a new Doze mode for improved battery management, better overall performance, a new 'performance mode' allowing users to increase the display’s brightness by 10%, and various changes to the user interface, including a reworked notification shade with Quick Settings toggles. The update also includes a new blue light filter which helps reducing eyestrain when reading or watching content on the display at night or in the dark. Productivity-oriented users can look forward to the addition of Multi-Window mode, which allows two applications to run simultaneously in a split-screen environment. Lastly, Android 7.0 Nougat for the Samsung Galaxy S6 devices includes the Android OS security patch for March, and is pre-loaded with Samsung’s Game Launcher application, offering new tools for mobile gaming enthusiasts including a screenshot and record feature. 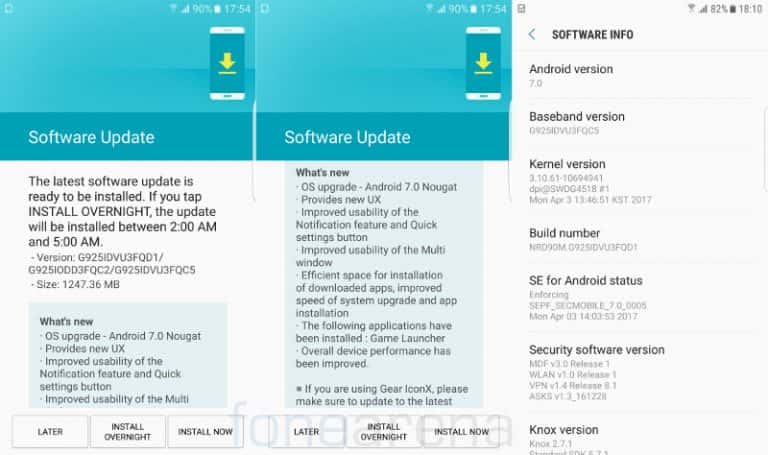