Recently leaked preview materials for the upcoming HTC U (otherwise referred to as the HTC Ocean) confirm the existence of the Edge Sensors and other features coming to the device. Though the information included in these materials do not detail all of the phone’s actual hardware and specifications, they do discuss some of them along with plenty of the phone’s functions and special features that consumers can expect when the phone launches later this year, and it does show a tiny bit of detail on the phone’s actual hardware design.

The biggest feature perhaps are the Edge Sensors which look to be placed closer to the bottom of the device, and will allow users to interact with the edges of the phone frame to complete tasks or certain functions. Based on the material information, users will be able to squeeze the edges of the phone frame for a short period to enable certain gestures while the device is in a sleep state with the display off. Users can also enable these gestures with a long squeeze, and if both are set up then it’s possible to have a gesture for both and expand the gesture functionality. Once enabled, these gestures open up a range of different functions that can be accessed with easy, one-handed operation for things like launching the camera, launching Google Assistant, launching the HTC Sense Companion, and even turning on the Wi-Fi Hotspot. These are just a few examples but there are more which can be viewed in the screenshots below. In addition to using a short squeeze or long squeeze to enable the gestures, the setup of this feature allows users to configure their sensitivity of their grip. There are three different levels for this configuration and users can choose the best option for their personal needs so that the phone has less of a chance to mis-trigger when squeezing the Edge Sensors. 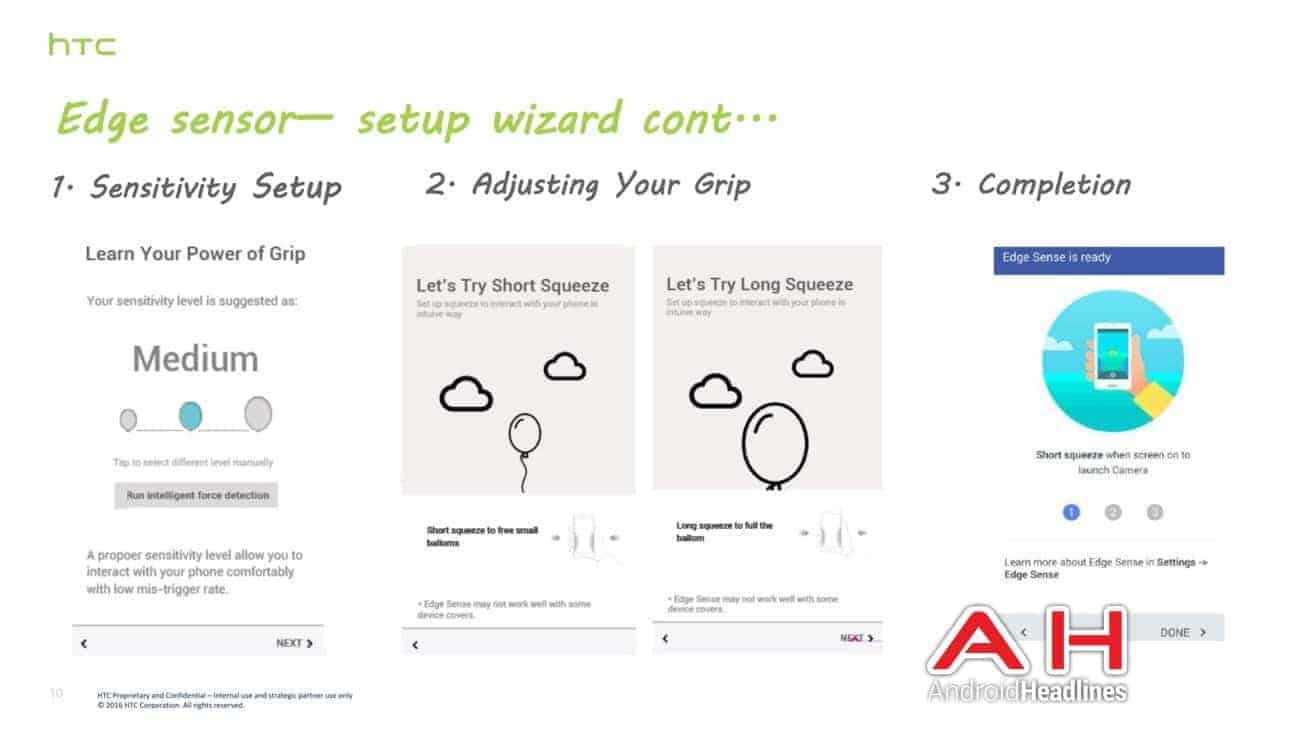 The HTC Ocean will come with an enhanced camera with some advanced HDR settings to promote better picture quality, such as HDR+, Smart Video Zoom, 3D Audio and Hi-Res Recording functions. The HDR+ will offer up “Real-Time HDR scene detection” though it isn’t clear from the materials themselves how well this will actually work, but judging from the image slide and the description it seems like users will be able to point their phone cameras at a scene, and the HDR+ color reproduction will shift in the viewfinder in real time so that it’s possible to see what the image will look like with the HDR+ processing before the photo is actually taken. The device has four microphones for recording sound to get you the best possible audio quality for your videos, and there are two different audio recording modes which as mentioned above are, 3D Audio and the Hi-Res Recording option. 3D Audio will be the default setting, and will be aimed at adding a surround sound effect to your recordings, while the Hi-Res mode will be meant to bring a “full range” of lossless sound to the recording which means there shouldn’t be any quality degradation. 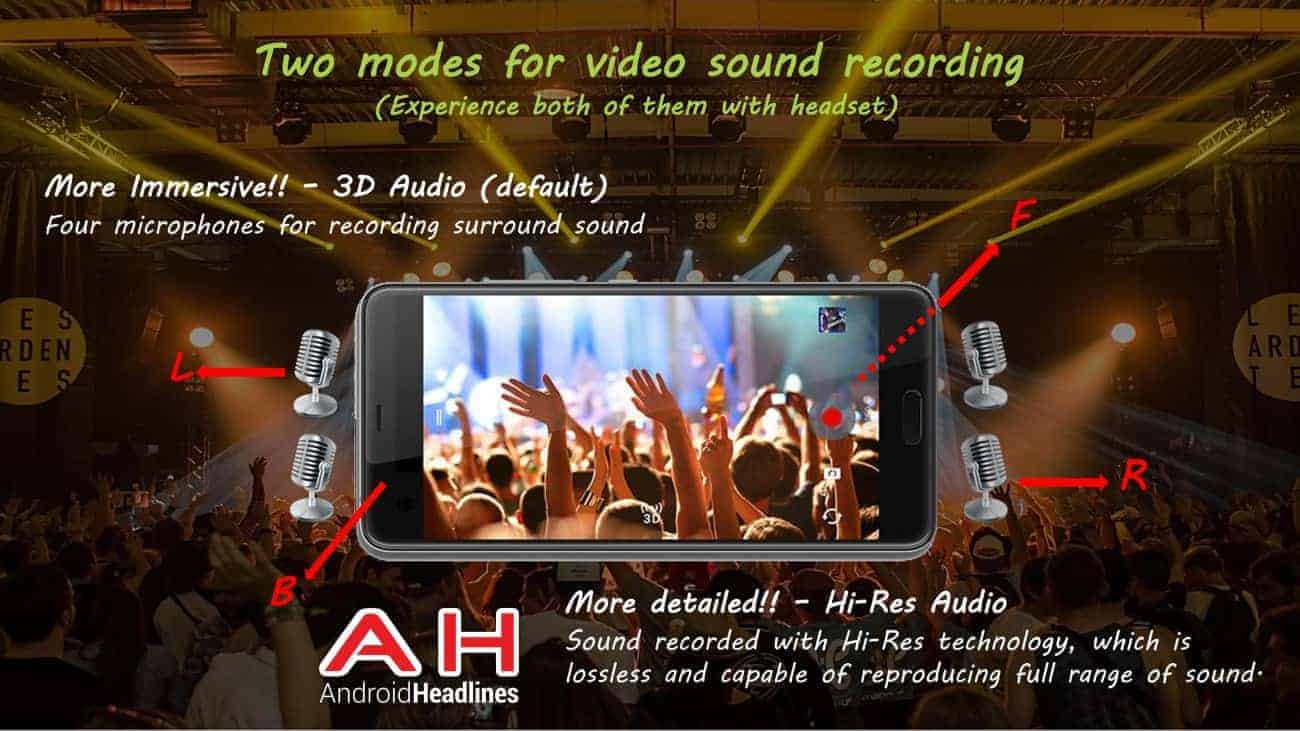 There will also be Multimedia BoomSound included which is likely not too much of a surprise as this is HTC’s signature audio trait on many of their other high-end phones, though the device does use USB Type-C and it does not come with a 3.5mm audio port, which means users will need to plug in the included USB Type-C analog headset that comes with the device. The phone also has dual speakers so the sound quality for music even without the headset should be pretty decent, and the device features a technology called HTC USonic that allows users to configure a sound profile for the device that is unique to them and them alone. The way that it works is that users will plug in the USB Type-C analog headset, and then use HTC USonic to detect their unique ear canal to personalize an audio profile. The materials state that this process should only take a few seconds so getting everything set up shouldn’t be a very long process, and USonic can even be used to balance the different levels of ambient noise around the user so they can change things up based on their environment. For example, say you’re leaving home and you end up on a busy and crowded train with people talking around you. Opening up USonic, you could re-balance the sound levels for a noisier environment like the one you’re in to get the best possible audio for your music or videos.

When you’re not using a headset the HTC Ocean will allow you to use the dual speakers with one at the top of the device and one at the bottom so you have stereo sound for your media content. Moving away from the audio, the phone also includes a feature called Sense Link which is meant to be a way to have some phone interaction on your laptop or desktop. By installing the HTC Sense Link PC client, users can easily copy and paste content between the phone and the computer, see phone notifications on the computer (though it isn’t noted if users will be able to respond to these or just view them), and it can also be used to continue reading an article on the PC that may have been started on the phone. Sense Companion will b included too, but this has already debuted on the HTC U Play and the HTC U Ultra, so there’s nothing unique about this feature in regards to this particular device and it will be the same version as what can be found on the other two phones. 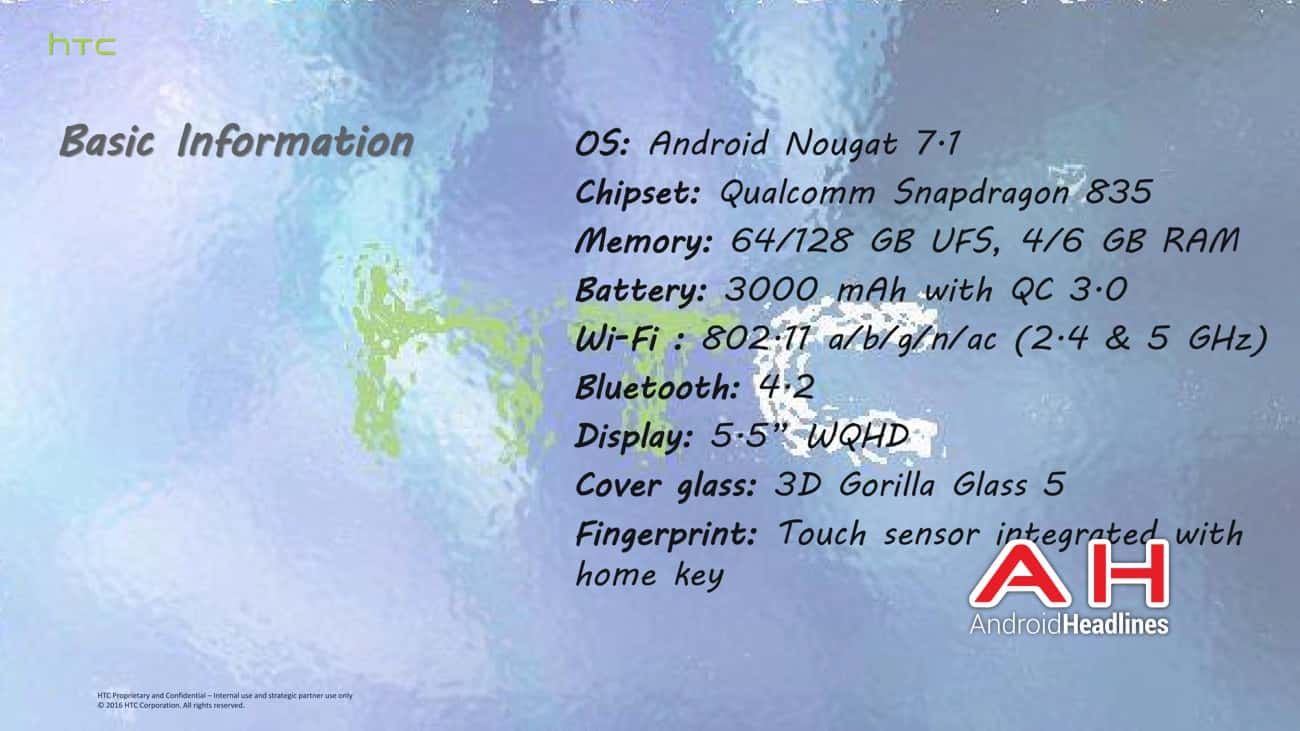 In regards to the specs, the phone will come running on Android 7.1 Nougat software with the Sense Home UI layered on top, and it will come powered by the Qualcomm Snapdragon 835 processor. There will be two variations of the device in regards to memory according to the preview materials which include a 64GB storage option that comes with 4GB of RAM, and a 128GB storage option which comes with 6GB of RAM, though this could potentially change when HTC actually launches the device and they could choose to launch one option only or keep the same amount of RAM. It also isn’t clear if either of the variations will be exclusive to specific regions if they do both launch. The battery inside will be 3,000mAh and it will support Quick Charge 3.0 for a super fast charge in no time. It also supports Bluetooth 4.2 and Wi-Fi 802.11ac with 2.4GHz and 5GHz, and it comes with a 5.5-inch WQHD screen that’s protected by Gorilla Glass 5, as well as a fingerprint sensor that will be integrated with the home key. It will also feature an Ultrapixel front-facing camera but the details of the quality of the sensor aren’t mentioned, nor are they mentioned for the rear-facing camera. There is no information yet on a release time frame for this device but if it’s already in preview testing then it shouldn’t be too far off.