The Samsung Galaxy S8 Plus is one of the most exciting flagship phones to be unveiled so far this year, but one of the biggest concerns regarding the device was whether or not it can hold its own against its rivals in regards to battery life, seeing how it boasts a generous 6.2-inch display with a resolution of 2960 by 1440 pixels and a powerful system-on-chip, both of which rely on a relatively modest 3,500mAh battery. Fortunately, preliminary battery benchmarks conducted by Phone Arena show that the Galaxy S8 Plus offers no less than eight hours of on-screen battery life under certain conditions.

One of the benefits of having an “Infinity” display is the fact that it allows for more screen space in a smaller, bezel-less package. However, the downside of this new design language is that a larger, high-resolution panel can greatly affect battery life. In this new generation of bezel-free devices, a larger display does not necessarily equate to a larger internal battery given that overall device dimensions are not larger to those of an average flagship. Case in point, while the Galaxy S8 Plus carries a 6.2-inch display, it is powered by a 3,500mAh battery. In contrast, the Galaxy S7 Edge sports a smaller, 5.5-inch panel, all while accommodating a larger 3,600mAh battery. Needless to say, people have been wondering whether the Galaxy S8 Plus will be able to keep up with the competition, and according to Phone Arena’s tests, the latest flagship yields excellent results. It managed to achieve eight hours of on-screen time, whereas the Galaxy S7 Edge lasted for seven hours and 18 minutes, and the Galaxy S7 made it through six hours and 37 minutes of testing on a single charge. It also outperformed the Google Pixel XL, OnePlus 3T, and the Huawei P10. According to the source, all the smartphones were tested under the same conditions, with their panels set at 200 nits of brightness. However, it should also be noted that the Galaxy S8 Plus was tested with the default resolution of 2220 by 1080 pixels that’s significantly lower than its maximum resolution.

The smartphone’s recharge rate was also tested in parallel with some of its rivals and predecessors, and reportedly the Galaxy S8 Plus can fill its 3,500mAh battery in 99 minutes, same as the Galaxy S7 Edge, thanks to Samsung’s Fast Adaptive Charging technology. In contrast, the Apple iPhone 7 Plus fully recharges in 197 minutes, and the Google Pixel XL takes 118 minutes to do the same. The LG V20 yields better results with 86 minutes of recharge time, and the OnePlus 3T outperforms the LG V20 by one minute. 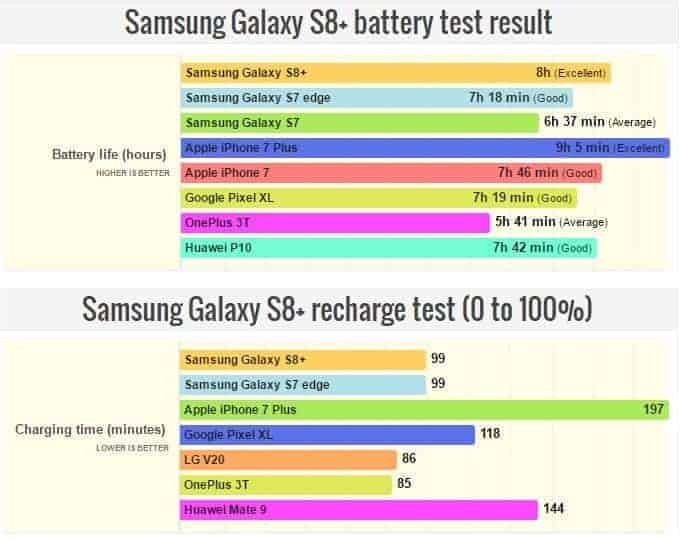