Once upon a time, Google Earth was the subject of much conversation, pitting itself on the cutting edge of satellite aggregation technology and attempting to map every corner and facet of our globe.  Now many years later the technology has seemingly been eclipsed by Google’s own Google Maps engine, with Google Maps even injecting Google Earth’s data sources for easier and more accurate satellite imagery on all our devices.  Now it looks like Google is looking to resurrect Google Earth from the ashes of cultural irrelevance by bringing about a brand new version, and likely some really big new features.  This all in time for Earth Day, which is April 22 if you haven’t been keeping track, and Google will be taking the lid off its new software version at an event on April 18th.

While the name Google Earth may not be an every day household name, Google has been regularly updating one of its original huge projects with tons of features over the past couple of years.  Near the end of last year we saw a big VR update for Google Earth that brought some unbelievable views of the world right to your face via an HTC Vive, or other compatible Steam VR headsets that might be in the wings.  This brought Google’s new high resolution imagery to life by letting users walk around the world when and where they want, exploring deep down into places and seeing things as if they were really there.  Google has also brought its open source mantra to Google Earth Enterprise, a service that was once a well utilized paid service to give companies the freedom and flexibility to build their own custom maps and data using the power of the Google Earth Engine.

What’s in store for the latest build of Google Earth?  There aren’t any hints right now, and given that Google has reach all across platforms, whether it be desktops, mobile devices or in VR space, it’s difficult to wonder exactly what they’ll be doing.  Given that they’re unveiling it right before Earth Day 2017, however, it’s likely it has something specific to do with historical data and a better visual representation of events transpiring around the Globe.  Google has been very forthcoming with its data and utilizing it to paint a picture of world events, specifically Climate Change and other disastrous events that are continually affecting our planet.  Google’s elaborate timelapse engine shows changes from 1984 to 2016 anywhere on the map, utilizing multiple sources and showing cloudless imagery from around the world to better understand the changes the planet has gone through in the past few years.  Will this new announcement be an extension of this project, or a new one entirely?  We’ll find out in just a short week! 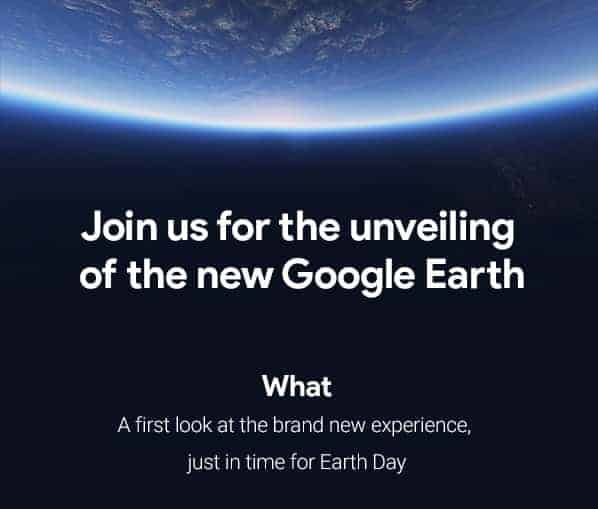