It seems Google Pixel and Pixel XL owners who are part of the Android Beta Program are now able to download the stable version of Android 7.1.2 (Nougat). This is the same version which first became available to Pixel, Pixel XL, Nexus 6P, Nexus 5X, Pixel C, and Nexus Player owners, back at the start of April. However, it did not at the time become available to those part of the beta program. So if you own the Pixel or Pixel XL, whether or not you are on the stable version of the 7.1.2 already, is largely dependent on whether you were part of the beta program or not.

That of course how now changed as the update seems to have been made available this morning to Pixel and Pixel XL owners. If you own either of these devices and have not seen the update prompt yet, then it is likely that it will show up if you manually check for updates in settings. While the actual update tool won’t show the update, once checked, it seems to prompt the beta program notification to show up, allowing the download and installation of the update. At the moment, it doesn't seem as though the update brings anything new to the table, other than the stable version of the Android 7.1.2, compared to the beta version that the two devices are already running. However, the version number does change to version N2G47E – the same version already running on the Pixel and Pixel XLs that are not part of the beta. Although, that number might differ slightly for the Verizon version, as well as international models. In terms of size, the update is a relatively small one – weighing in at just under 32MB.

While it seems somewhat strange for Pixel beta testers to only now be getting the update, the Pixels are not the only devices to go through this. The Nexus 6P has largely gone through the same process as this was also a device that saw the original update become available at the start of April. Although, owners of the Nexus 6P who were also part of the beta program only saw their update coming through a few days ago, on April 12. So it just seems that this week, is the turn of the Pixel and Pixel XL. 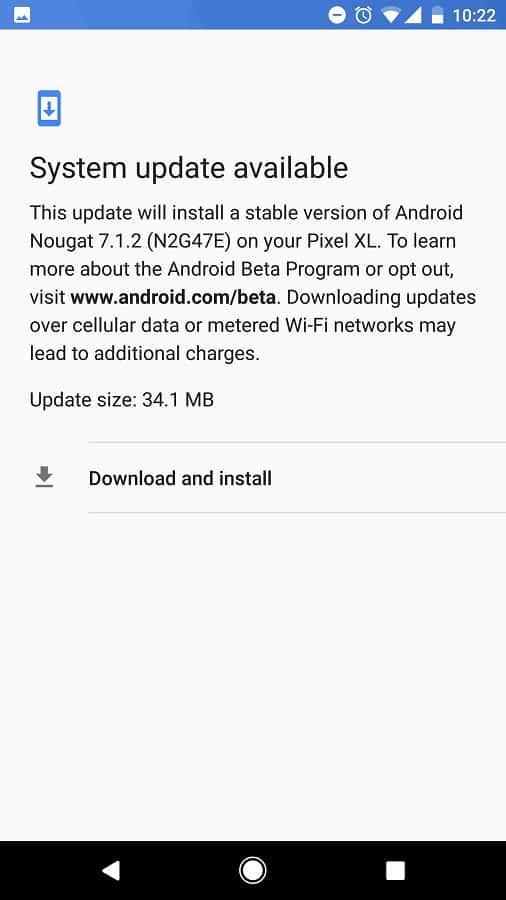