A listing is being shown on GFXBench, a benchmarking website, for the Galaxy A7 showing it running on Android 7.0 Nougat. Samsung released their Galaxy A (2017) series around three months ago. At the time it came as a surprise to many that it shipped with the Android 6.0.1 Marshmallow operating system, even though Nougat was already around and being rolled out to many devices. This suggests that the update for the device should be coming very soon – these listings are usually shown whenever a new update is close to being released. Although the recent listing is for the Galaxy A7 (2017) only, it’s possible that Samsung will test Android Nougat for other devices in the series around the same time.

Users of these devices are also no doubt hoping that they won’t be affected by the same problems that are currently being reported by aficionados of the Galaxy S7, in particular, those devices in the US which are on the Verizon network. Since the update was released to Galaxy S7 devices various bugs, errors, and other problems have been plaguing users. The reported problems on Verizon’s community forums list are ongoing. There are issues with notification lights not working and problems with camera app resolution, which is too low. It appears this can only be fixed by resetting the device to its factory settings. Some have also reported their devices are stuck in boot loops, while others have a complete inability to make and receive calls.

The Android Nougat update for Samsung’s high-end devices such as the Galaxy Note 5, Galaxy S6 Edge+ and Galaxy S7 has been around for a few weeks, although it was initially delayed due to reports of bugs and other errors. The recent appearance of this listing now seems to suggest that Samsung are now focusing on making the update available to users of its mid-price smartphone range. The Seoul-based electronics giant have not yet formally confirmed when they will officially roll out the latest Android Nougat update to the Galaxy A (2017) series. It’s thought that it could be at least a couple of months before the company confirms the update is available. 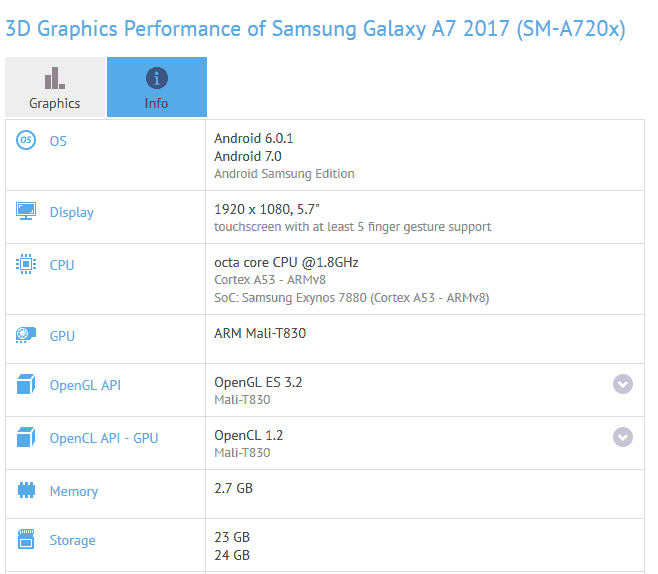