For those with a constant eye out for a new mid-range device, a brand new Alcatel has just hit GFXBench. The specs themselves are for Alcatel’s Idol 5, making this a follow-up to last years Alcatel Idol 4. This shouldn’t be confused with another recent benchmark – for Alcatel’s Idol 5s – although the specs of both devices do bear some similarity to one another with a few noteworthy exceptions.

The Alcatel Idol 5 is powered by one of Qualcomm’s Snapdragon octa-core processors clocked at 2.0GHz, coupled with an Adreno 506 GPU – hinting at a Snapdragon 625 setup. Behind that, it sports 3GB of RAM and 32GB of internal storage. That’s packed in behind a multi-touch 5.2-inch fullHD screen. Above the screen lies an 8-megapixel shooter and flipping to the back reveals a 12-megapixel main camera that is 4K video capable. There’s no HDR photo capability with either of those, unfortunately, but all of the other camera features from auto-focus to face detection are intact. The handset also doesn’t appear to support NFC, but all the other sensors that are to be expected on a mid-level device are there – including an accelerometer, Bluetooth, compass, GPS, gyro, light sensors, pedometer, and a proximity sensor. Additionally, no battery information has been made available yet. That said, the Alcatel Idol 5 could be a pretty desirable smartphone when it finally drops for the middle market since it is also expected to be running Android 7.1.1 Nougat under the hood – with the many great features that should entail.

Where this device appears to differ most from the company’s already benchmarked Idol 5s is in the chipset department. That other Alcatel device is expected to come with a MediaTek Helio P20 processor, clocked at 1.69GHz in an octa-core arrangement. The Helio P20 is generally coupled with Mali-T880 MP2 graphics. That minor set of differences will most likely lead to the Idol 5 and Idol 5s being comparable to last year’s Idol 4 and Idol 4s, in terms of what separates them from one another. Neither device could really be called “high-end” but, as with many of Alcatel’s devices, appear to be ready to hold their own at their respective level of the market. And the Idol 5 should perform slightly better than its counterpart. 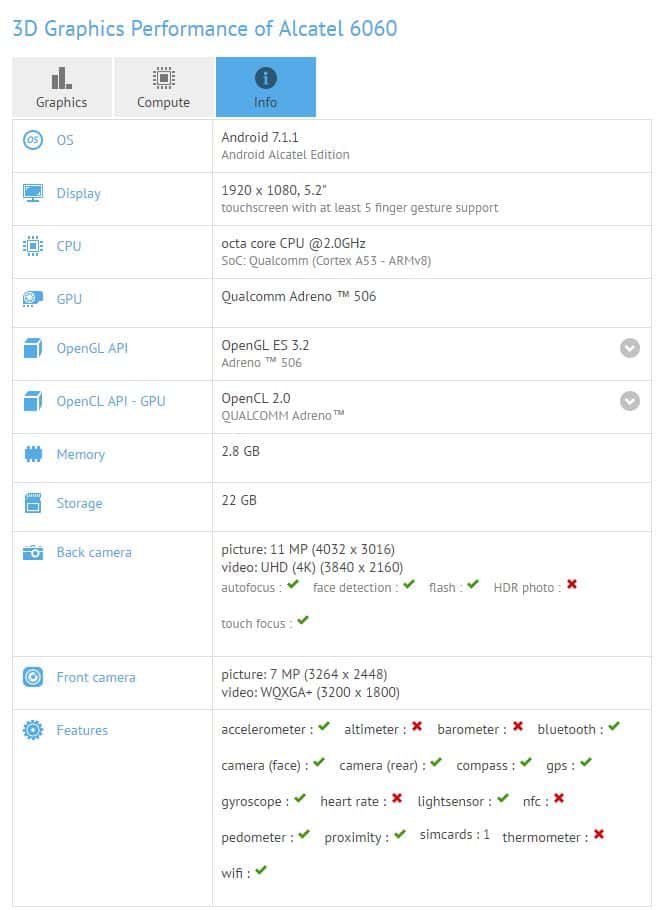