A smartphone believed to be the Samsung Galaxy On7 Pro (2017) has now been spotted being benchmarked on GFXBench. If this sounds familiar, than that may be due to the Samsung Galaxy On7 Pro (2017) having been spotted being benchmarked on GFXBench back at the start of February of this year. However, the difference this time around is that one particular spec is a little different to what was noted before.

The current benchmark (dated April 5) suggests that the Samsung Galaxy On7 Pro will come equipped with a 5.7-inch display with a 1920 x 1080 resolution. While inside, the Galaxy On7 Pro will come loaded with 4GB RAM (listed as 3.6GB), 32GB internal storage (listed as 25GB) and powered by a MediaTek MT6757 octa-core SoC. In terms of cameras, the benchmark listing highlights a 12-megapixel rear camera will be provided, as well as another 12-megapixel camera on the front. While the only other notable reveal is that the Galaxy On7 Pro is listed to come running on Android 7.0 (Nougat) out of the box.

The change however, comes in the RAM department as while the current benchmark listing shows 4GB RAM, the previous benchmark listing suggested only 3GB RAM would be on board. Generally speaking, all of the rest of the specs seem to be the same, although the storage differs very slightly (24GB compared to 25GB). So the obvious assumption would be that Samsung intends to release two variants of the Galaxy On7 Pro which differ in RAM count. Although, such variance usually does also lead to a variance in storage capacity as well – which does not seem to be the case. While a very slight difference has been noted in storage between the two listings, overall, both listings suggest both versions will come with 32GB storage. For reference, both listings are for the exact same model number, SM-G615F. Differences aside, with the Galaxy On7 Pro making its way again to GFXBench, as well as also recently showing up at the Wi-Fi Alliance, it does stand to reason that the device is nearing its launch – where any and all variants will be confirmed. In the meantime, you can check out the results of this latest benchmarking below. 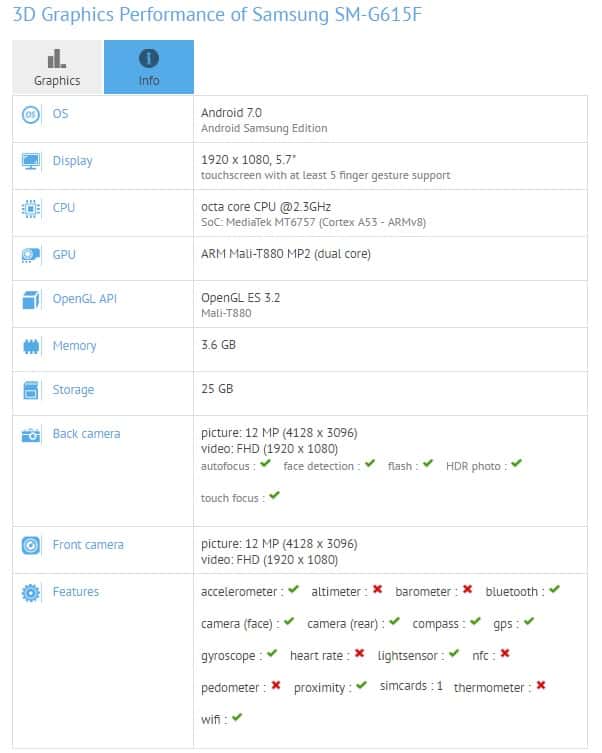