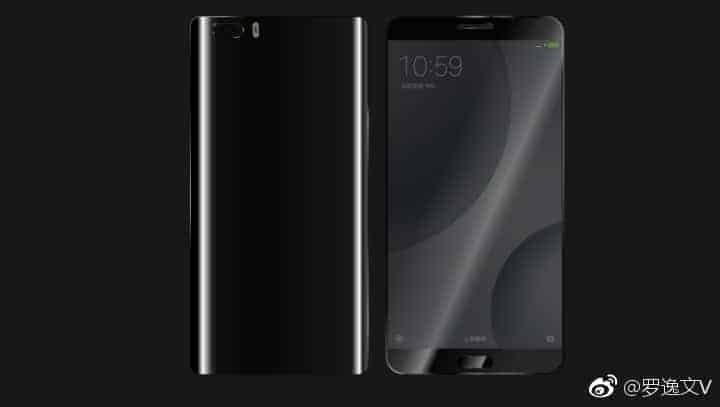 The Xiaomi Mi 6 rumors and leaks have been popping up quite frequently lately, and now we get to see yet another leak of the company's upcoming flagship. Two new Xiaomi Mi 6 images surfaced in China, and they're showing off a really nice looking smartphone, that resembles its predecessor to an extent, though do keep in mind that it is possible these are only concept renders. In any case, this is the first time we're seeing this design of the Xiaomi Mi 6, read on.

The Xiaomi Mi 6 variant that leaked here seems to be made out of ceramic, which means this could be the 'Plus' model, 'Pro' model, or whatever Xiaomi opts to call it in the end. This handset sports a curved back, just like its predecessor, and it also comes with a fingerprint scanner below its display. This buttons quite probably doubles as a home key, though we don't know if it's a physical button, or just a capacitive one. We presume that the back and overview keys will be placed next to that home button, even though we can't see them in the provided images. Truth be told, this smartphone looks like a combination between the Xiaomi Mi 6 and the Xiaomi Mi Note 2, which is what the Xiaomi Mi 6 is supposed to look like, if previous rumors are to be believed. This phone's display is flat, not curved, and that's also something that rumors have been saying will happen, it seems like Xiaomi is not interested in releasing a curved variant of the Xiaomi Mi 6. The device comes with really thin bezels on the sides, they're almost non-existent, and its bezels above and below the display are not that thick either.

If you look at the back of the device, you'll notice that it packs a dual camera setup, and the second image reveals that we're looking at Sony's IMX400 image sensor here, which is a 19-megapixel shooter that Sony included in the Xperia XZ Premium and Xperia XZs. We don't know if both cameras sport the same sensor, which is highly unlikely, but that sure sounds interesting. The second image also reveals that the phone will be available in 64GB, 128GB and 256GB storage variants, which will cost 1,999 Yuan ($289), 2,299 Yuan ($332) and 2,899 Yuan ($419).