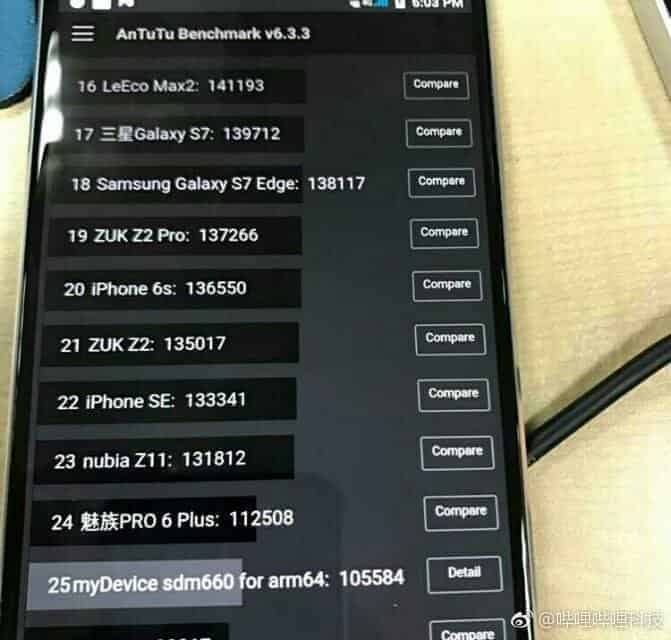 An unknown device has appeared on AnTuTu, supposedly sporting the Qualcomm Snapdragon 660 processor, and it scored 105,576. That's a pretty high score for a mid-range chipset. Now keep in mind that the only proof that is available that this is a Snapdragon 660 device is the name that AnTuTu shows for it. Which is "myDevice sdm660 for arm64", so it's not confirmed that this is indeed a Snapdragon 660-powered device, but it is fairly likely. With this score, it's sitting at number 25, below the Meizu Pro 6 Plus which sports the Samsung Exynos 8890 octa-core processor along with 4GB of RAM. So that shows just how good this benchmark score really is.

Now it's important to note here that the Snapdragon 660 has not been announced yet. It had leaked several times over the past few months, so we have a good idea of what to expect from it. According to leaks, the Snapdragon 660 is a big.LITTLE octa-core chipset, featuring four 2.2GHz cores and four 1.9GHz cores, and it'll be manufactured on Samsung's 14nm process. It's supposedly being paired with the Adreno 512 GPU for graphics as well. Of course, take all of this with a grain of salt, as none of it is actually confirmed until Qualcomm makes the processor official.

It's also worth pointing out that this is likely not a smartphone from a manufacturer. It is very likely that this is a reference device that Qualcomm built to test and run the Snapdragon 660, to see just how good it runs, and if it needs any fine tuning. This is a very common practice for chipset makers like Qualcomm. MediaTek, and others do it as well.