A new version of Gmail (v7.2) is currently in the process of rolling out to Android device owners and this latest version brings with it an improvement to app shortcuts. Before the update, the only Gmail app shortcut was ‘Compose’. Which once pressed would open the Gmail app in your primary Google account. However this is where the new change has come into effect. Following the update, the original ‘Compose’ shortcut is still present, however, so are shortcuts for multiple Google accounts that you might have. Providing the user with a quick way to jump to a specific Google account.

However, that is not all – as the update also allows the user to pin any of these shortcuts to the home screen. So you could in effect, pin a shortcut for each one of your individual Gmail email addresses, for the ultimate quick access to all of your accounts. Although, while it not confirmed, it does seem as though the shortcuts only show shortcuts for three of your email addresses. So if you do have more than three Google/Gmail accounts, then you might have to make use of a limit of three quick access shortcuts. Likewise, there is no clear indication that you can choose which of your (more than three) email accounts show up as shortcuts. Either way though, three or less and you are good to go.

This update is already showing up on the Google Play Store with the changelog now detailing that the ability to “long press on the app icon to quickly compose a message, select an account, or drag and pin a shortcut” is present. For those wondering, this is also the update that brings with it added support for exchange tasks in Gmail. So if you are aware that you have already received that update, then you have also received this one as well. Although, the shortcut feature is only usable by smartphones running Android 7.1 (Nougat) as that is when app shortcut support was originally added. If you have yet to receive the update, you will in a matter of days, if not hours and you can see an example of how the new app shortcut layout looks in the image below. 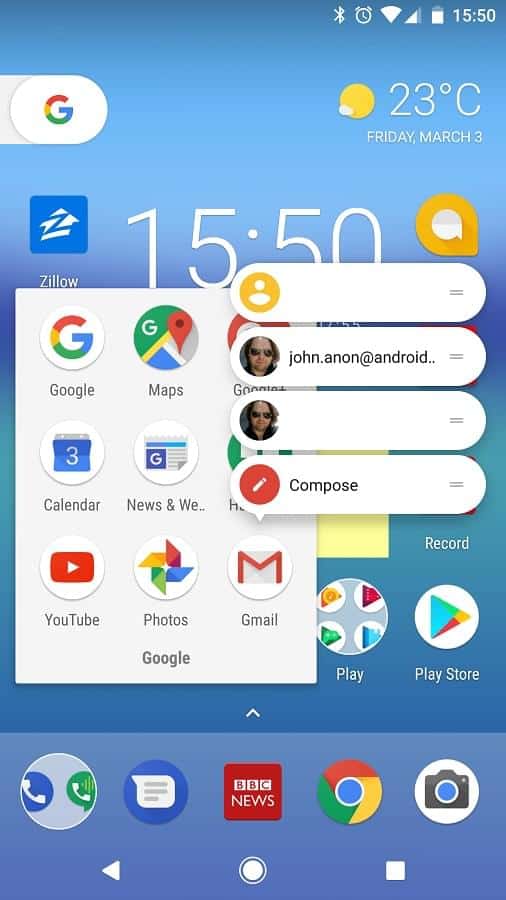