Skip to content
Advertisement
Trusted By Millions
Independent, Expert Android News You Can Trust, Since 2010
Publishing More Android Than Anyone Else
11
Today
109
This Week
757
This Month
757
This Year
118597
All Time
Advertisement Most everybody loves special effects – they add that certain ‘WOW’ factor when watching a scene in a movie and even a short scene in a video. Those slow motion effects were nearly impossible to catch using a smartphone, but Sony’s new Xperia XZ Premium and Xperia XZs have a brand new camera called Motion Eye which gives us a glimpse – albeit a short one – at what slow motion video is like from their smartphones. This Motion Eye camera shoots slow motion videos four times slower than any other smartphone camera, allowing you to dazzle and impress your viewers.

Motion in a movie or video is simply a collection of still shots that run so fast they trick your senses into seeing actual movement on the screen – a concept that is not that difficult to do with your eyes and your brain’s interpretation of what you see. Our senses are easily fooled at a movies normal rate of 24 frames-per-second (fps), although some more intensely graphic movies such as Avatar and The Hobbit were shot at 48 fps. YouTube videos are about 25 to 30 fps and those look plenty smooth. You can either speed up the fps or slow down the fps to achieve some impressive effects. The new Sony cameras can shoot at an astonishing rate of 960 fps, and by slowing that down to only 30 fps for viewing, what you are seeing is the picture motion going 32 times slower than real life. It gives some amazing viewing experiences as shown in the video below.

While this may sound like a simple thing to do, many processes must take place in order for this to happen. Shooting and storing pictures at 960 fps requires a lot of memory and to process this information correctly, the camera, itself, must buffer the frames. Sony does this by inserting a 128MB DRAM layer of memory in between the pixel section of the lens and the circuit section. You press the record button to start recording a standard video and then press it again to start recording at 960 fps, which lasts only 0.182 seconds – however, this can be transformed into a full six seconds of Super Slow-Motion video. You must press the camera button each time you want to capture more slow motion video. You must be fast and ready to make sure you capture the part of the scene you want to slow down. To help with the smoothness at the start of your video, the Motion Eye camera will take three full resolution frames before you start to record if the camera detects motion – hence its name. Words of caution – the 128GB DRAM will fill up less than 2 seconds with 960 fps recordings, and due to the increased ISO of the camera, slow motion videos work best in good lighting conditions. 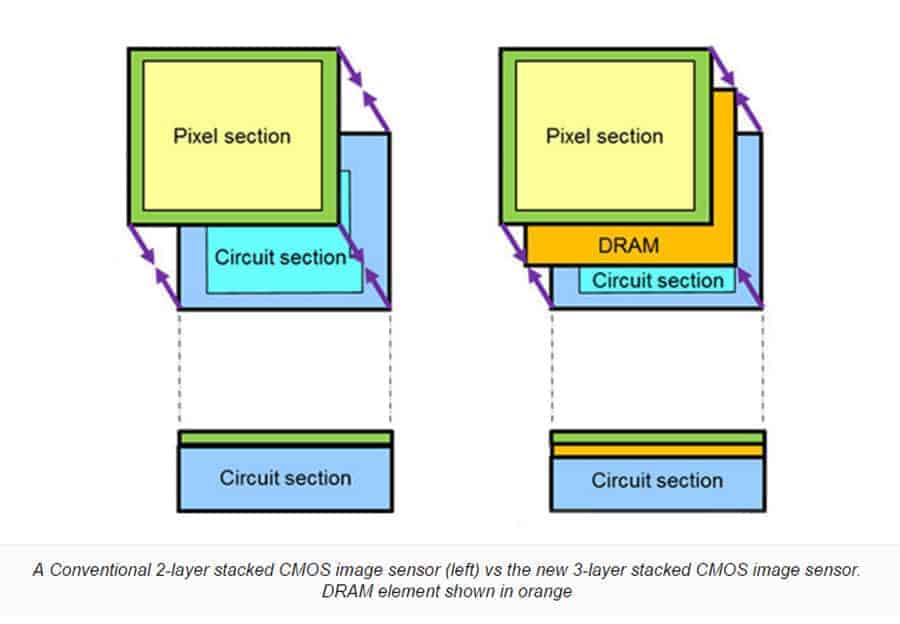