A new certification listing in Russia appears to point towards the release of an upcoming device named the Xperia L1. So far this year, Sony has launched four new devices. The Xperia XZs and Xperia XZ Premium, both of which are high-end offerings, as well as the Xperia XA1 and XA1 Ultra, which are both mid-range offerings. Now, the use of the Xperia L1 name may seem odd to some, but it isn't the first time the Japanese company has used the Xperia L name in its smartphones – Back in 2013, Sony launched the original Xperia L. The device was a typical mid-range offering with a slightly more unique design, at least in terms of Sony's offerings, due to the curved back.

Looking at the certification listing there is no way of telling what category this new device will fall into, but the fact that the original Xperia L was a mid-range device, hints that the new Xperia L1 may be just that, a new mid-range device. Now, due to the four year difference between the original Xperia L and the new Xperia L1, there isn't much that can be speculated regarding actual specs other than the category. Considering Sony has already launched the Xperia XA1 this year, though, it's likely the Xperia L1 will sit below this device. Aside from this, there is also another possibility. Sony has historically used its Xperia E line for low-end devices, but the series should be due for a refresh around May. If the company was to follow its traditional naming scheme, this year's model would technically be called the Xperia E6, which means it would be 5 generations ahead of the rest of Sony's range. It's possible that Sony will relaunch the low-end series under the Xperia L1 name and therefore bring the series in line with other models.

For now, this is only speculation, but considering the fact that Sony has previously stated its intention to concentrate on the Xperia X name in terms of marketing, it seems unlikely Sony would go against this by launching a premium model under the Xperia L1 name. If the device does end up being a successor to the original Xperia L it'll definitely be interesting to see how the company positions it within the rest of its range. Nonetheless, considering the device has been certified in Russia, it shouldn't be too long before more details start appearing surrounding the device, along with an eventual launch date. 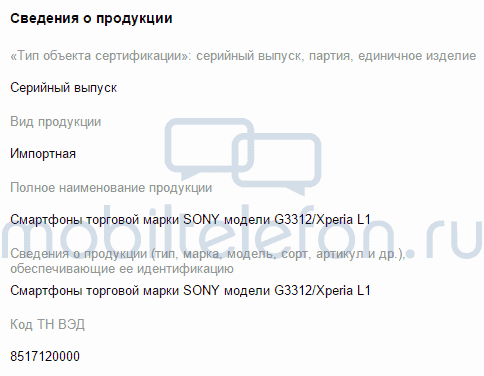