The Samsung Galaxy S8 has just popped up on AnTuTu. As some of you probably already know, the Galaxy S8 Plus surfaced on Geekbench a while back, both the Exynos and Snapdragon variants of the device popped up on Geekbench. Well, this time around AnTuTu is in focus, and we’re looking at a Snapdragon 835-powered variant of the Samsung Galaxy S8 here. Now, the first thing that you’ll probably notice here is the fact that this phone has a fullHD (1920 x 1080) display. Well, the Galaxy S8 will, almost certainly, sport a 5.8-inch 2960 x 1440 WQHD+ Super AMOLED panel, but it will come with a resolution changer included in its software, so it is possible that a test unit was set to a fullHD display and that AnTuTu picked up the wrong resolution somehow, which is why this listing reports 1920 x 1080 resolution.

Having that in mind, every other spec fits, most definitely. The Galaxy S8 (SM-G9500) will, according to this listing, ship with 4GB of RAM and 64GB of internal storage, though a 6GB RAM variant is also a possibility. Samsung might introduce two variants of this device, though the 6GB RAM model might launch in China only, and not at the same time as the regular model, but we’ll see. In any case, according to AnTuTu, the Galaxy S8 will sport a 12-megapixel shooter on its back, while an 8-megapixel camera will be available on the device’s front side. The Snapdragon 835 64-bit octa-core processor will fuel this smartphone, as already mentioned, and an Adreno 530 GPU will be included in the package as well, and will be in charge of graphics processing. Android 7.0 Nougat will come pre-installed on the Galaxy S8, with Samsung’s custom software on top of it, of course.

That being said, the Galaxy S8 will launch on March 29, which is in two days, and the Galaxy S8 Plus will almost certainly launch alongside it. The Galaxy S8 will be made out of metal and glass, while its display will be curved on the sides, same goes for its back side. The device will sport a fingerprint scanner on the back, and this time around Samsung’s flagship will not sport a physical home button, on-screen keys will replace the company’s signature home key. 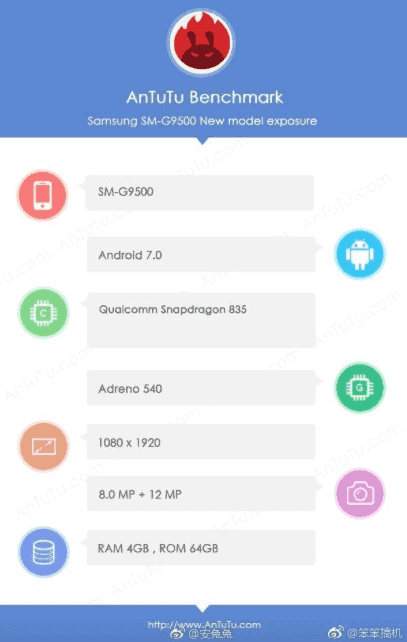