The Samsung Galaxy S8 Plus has just surfaced on Geekbench it seems. The Samsung SM-G955U paid a visit to the benchmarking site, and as part of it, revealed some of its benchmarking results and also partial specs. Now, do keep in mind that we’re looking at the Snapdragon variant of the Galaxy S8 Plus here, not the Exynos model. That being said, the device managed to hit 1,929 points in the single-core, and 6,084 points in the multi-core test over at Geekbench.

Now, according to Geekbench, this phone is equipped by the Snapdragon 835 64-bit octa-core SoC clocked at 1,90GHz, and it packs in 4GB of RAM. It’s also worth mentioning that Android 7.0 Nougat comes pre-installed on the device, at least on this test model that we’re taking a look at. So, it seems like the Galaxy S8 Plus will ship with 4GB of RAM, though that doesn’t mean that the 6GB RAM variant won’t be available as well, we’ll just have to wait and see what happens. As most of you probably already know, Samsung had announced the Galaxy S8 press conference during MWC 2017 a couple of days ago, the company will introduce the Galaxy S8 and (presumably) Galaxy S8 Plus on March 29th, and chances are that the two devices will become available in April. One variant of the Galaxy S8 will be fueled by the Snapdragon 835 64-bit octa-core processor by Qualcomm, while the other one will ship with Samsung’s very own Exynos 8895 64-bit octa-core processor.

Geekbench actually offers tons additional benchmarking details, little tidbits, and in case you’re interested in checking those out, feel free to follow the source link down below. We’ve been seeing a number of Galaxy S8 rumors and leaks in the last couple of weeks, and we basically already know what will the phone look like. A leak that surfaced yesterday is almost certainly legit, which means that the phone will sport a curved display, and have really, really thin bezels all around. Samsung is also ditching the physical home key this time around, which is quite interesting, and it’s also worth mentioning that the phone will be made out of metal and glass. The Galaxy S8 and Galaxy S8 Plus will be identical in terms of the design, though the Galaxy S8 Plus will be a larger handset. 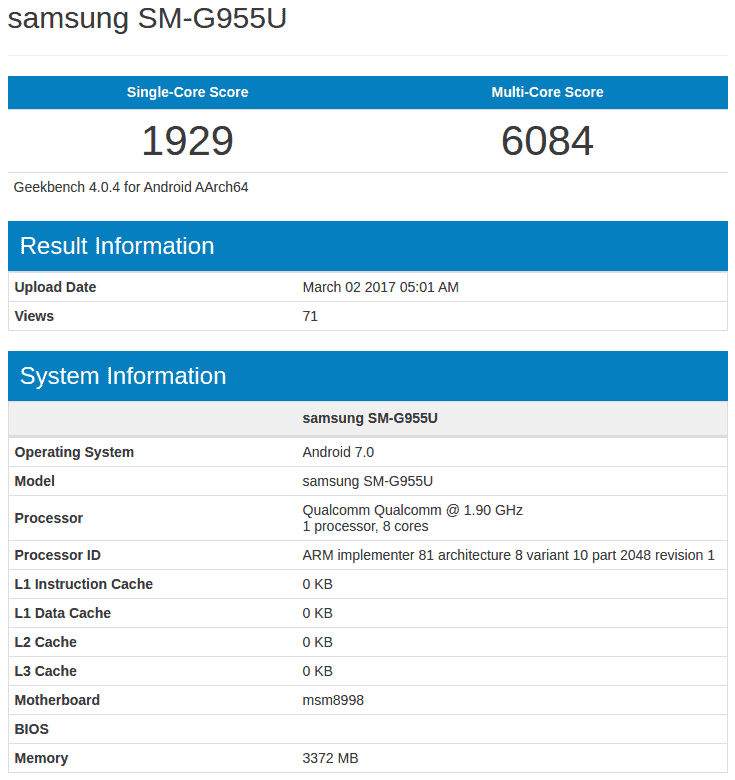